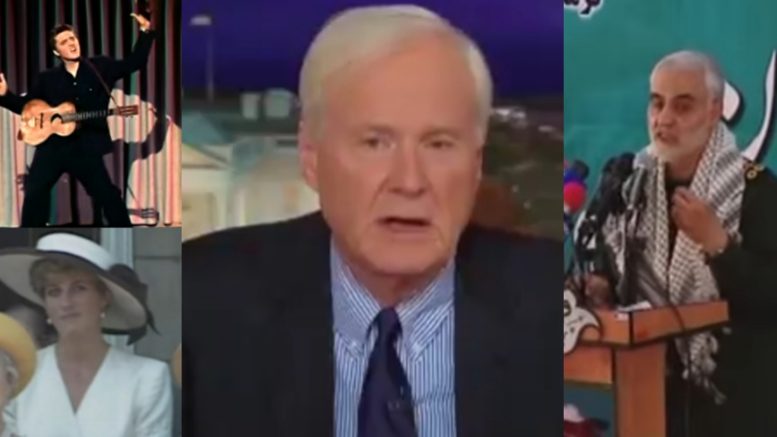 MSNBC host Chris Matthews compared the impact of Iranian General Qassem Soleimani’s death to that of Princess Diana and the King of Rock and Roll, Elvis Presley.

Matthews made the connection during one of his recent airings of Hard Ball.

It’s unclear where Matthews was going with his comparison, but it appeared as if he was suggesting President Trump miscalculated the “emotional impact” that would result from killing Soleimani.

“You know, when some people die…you don’t know what the impact is gonna be,” Matthews said.

“When Princess Diana died, for example, there was a huge emotional outpouring. These kinds of…Elvis Presley in our culture.”

He continued, “It turns out that this general he killed was a beloved hero of the Iranian people…” Video Below

Matthews then referred to pictures being displayed showing millions of Iranians mourning the death of Soleimani.

“These enormous crowds coming out — there’s no American emotion in this case, but there’s a hell of a lot of emotion on the other side.
Should our leaders know what they’re doing when they kill somebody?” Matthews questioned. Video Below

Related Article: Hardball Breaks Silence On The Swalwell Fart Noise, Claims It Came From A “Mug Scraping Across The Desk”

VP Pence To US Governors: “Call Nancy Pelosi & Call Chuck Schumer & Tell Them To Get Off The Dime”