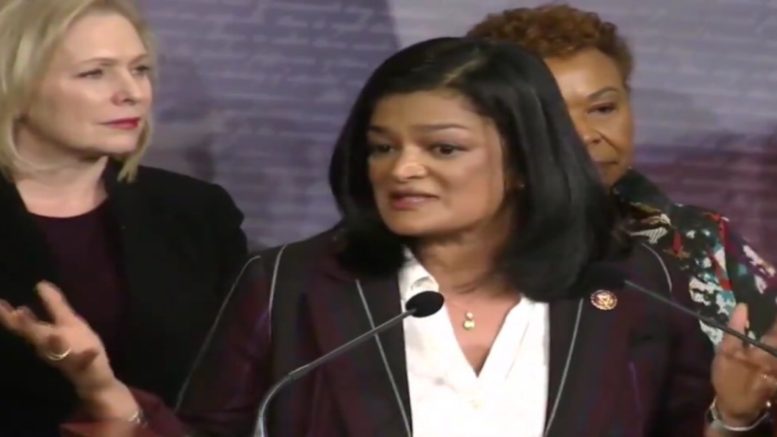 Rep. Pramila Jayapal (D-WA) complained during a press conference on Wednesday after being briefed on the U.S. airstrike that killed Iranian Qassem Soleimani.

The Washington congresswoman appeared to defend Iran and also suggested “we are significantly less safe” after eliminating Soleimani.

The Commander in Chief ordered the attack that killed the Iranian military mastermind, and Secretary of State Mike Pompeo said was equally as dangerous as former ISIS leader Abu Bakr al-Baghdadi.

Rep. Pramilia Jayapal said on Wednesday after Soleimoni was killed: “The result of that means that we are significantly less safe.” (Continued Below)

“Because had we stayed in the Iran Deal, had we not put forward a maximum pressure strategy, had we not assassinated General Soleimoni on false claims that somehow the 2002 AUMF (Authorization for Use of Military Force) covered this, we would be in a safer place. And yet today, we stand on the brink of war,” Jayapal claimed.

(Related: Rep. Rutherford To Rep. Jayapal: “You & Your Squad Of Ayatollah Sympathizers Are Spreading Propaganda That Divides Our Nation”)

Jayapal further insisted: “President Trump recklessly assassinated Qasem Soleimani. He had no evidence of an imminent threat or attack. And we say that coming from a classified briefing where, again, there was no raw evidence presented that there was an imminent threat.” (Video Below)

Dem Rep. defends Iran, says “had we not assassinated Gen. Soleimani…we would be in a safer place”https://t.co/cQk05iwGA8 pic.twitter.com/XOBur40Cx0

On Thursday, the House debated on the War Powers Resolution and Rep. Mark Meadows (R-NC) called out Democrats who opposed the airstrike that killed Soleimani.

He wondered: “How many Americans does a terrorist have to kill before [Democrats] join with us?”

.@MarkMeadows calls out Democrats opposing the Soleimani strike: “how many Americans does a terrorist have to kill”https://t.co/vaS0FdlZEG pic.twitter.com/bhSW8SQku1

(Related Article: In A Heated Exchange, Tom Homan Puts Dem Committee Chairwoman In Her Place: ‘You Work For Me!)

Jon Voight Reacts to the Mar-a-Lago Raid: ‘Is This is a Medieval Time, a Time When Wrongly Condemned is to be Expected?’