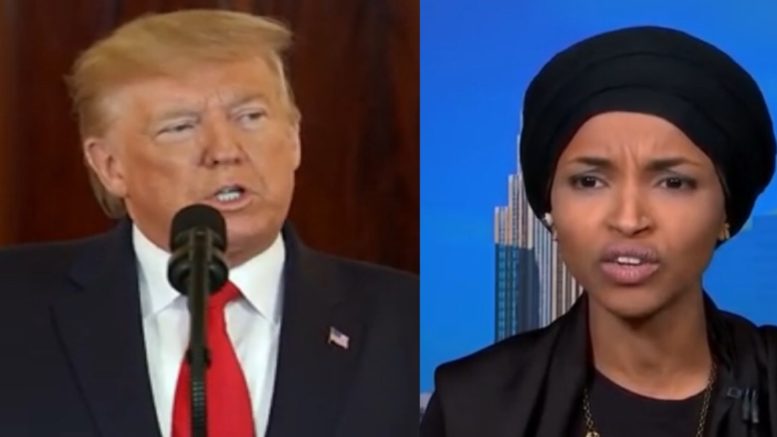 During the president’s speech to the nation, President Trump announced that the U.S. will “immediately impose additional punishing economic sanctions” on Iran.

“As we continue to evaluate options in response to Iranian aggression, the United States will immediately impose additional punishing economic sanctions on the Iranian regime,” President Trump said Wednesday.

“These powerful sanctions will remain until Iran changes its behavior,” the president firmly stated.

Rep. Ilhan Omar took to Twitter to criticize the Commander in Chief’s decision to punish Iran with additional sanctions, claiming that it “makes no sense” and is “not a measured response”. (Continued Below)

Omar tweeted in response to the President’s sanction decision: “This makes no sense. Sanctions are economic warfare. They have already caused medical shortages and countless deaths in Iran,” she wrote.

“You cannot claim to want deescalation and then announce new sanctions with no clear goal. This is not a measured response!” Omar decried.

Omar, however, is an avid supporter of the anti-Semitic Boycott, Divestment, and Sanctions (BDS) movement that is designed to destroy the state of Israel. Last summer, Omar was barred from an Israel congressional visit for “supporting” the BDS movement. In 2017, Israel passed a law prohibiting a foreigner entry who “knowingly issues a public call for boycotting Israel.” (Continued Below)

Omar, even introduced a pro-BDS resolution last year in Congress and was later condemned by House Speaker Nancy Pelosi (D-CA) at AIPAC, although Pelosi did not use her name directly.

“We must also be vigilant against bigoted or dangerous ideologies masquerading as policy, and that includes BDS,” Pelosi said.

This makes no sense. Sanctions are economic warfare.

They have already caused medical shortages and countless deaths in Iran.

You cannot claim to want deescalation and then announce new sanctions with no clear goal. This is not a measured response! https://t.co/sGWtwXuNDT