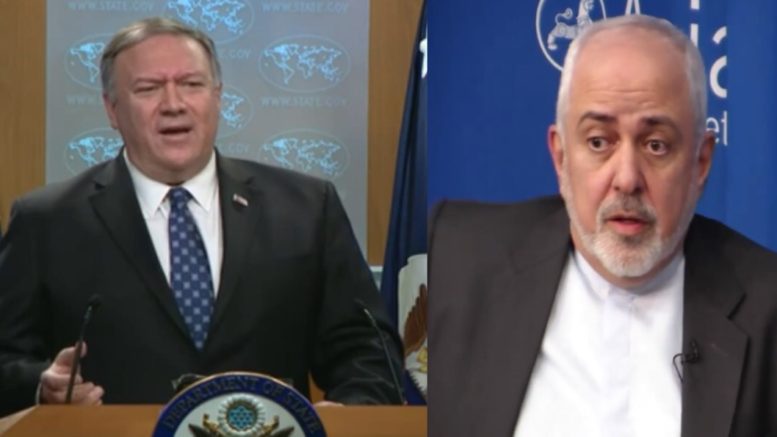 During the briefing, a reporter asked Pompeo about Iran’s foreign affairs minister, Mohammad Javad Zarif, who claimed Soleimani was on a “diplomatic visit to Iraq” and that the strike to take him out was “state terrorism”.

Secretary of State Mike Pompeo confirmed that the statements by Iran’s Foreign Affairs Minister Zarif are incorrect, stressing that the Department of Defense’s decision to target Soleimani was a legal decision, consistent with the US strategy.

“[Zarif’s] statement that Soleimani was traveling to Baghdad on a diplomatic mission… anybody here believe that? Is there any history that would indicate that it was remotely possible, this kind gentleman, this diplomat of great order, Qassem Soleimani, had traveled to Baghdad for the idea of conducting a peace mission?” Pompeo sarcastically asked reporters. “I made you reporters laugh … and that’s fantastic.”

“We know that wasn’t true. We not only know the history, we know in that moment that was not true. Zarif is a propagandist of the first order. And most of what you suggested in his text message or email …. was indeed Iranian propaganda. It’s not new, we’ve heard these same lies before. It’s fundamentally false. He was not there on a diplomatic mission trying to resolve a problem,” Pompeo stated.

“I know there was some story that he was there representing a Saudi peace deal, — I’ve spoken to my Saudi counterparts at great length. I’ll leave to them the contents of their message may be. But I can assure you that they will share my view that he was not there representing some kind of agreement that was going to reduce risk, or reduce the risk of lives to Americans when he was on that trip.” the Secretary of State added. (Continued Below)

On Sunday, Mike Pompeo appeared on 6 televisions shows to defend the American airstrike in Baghdad, while backing up President Trump’s threat that more action would come if Iran retaliates against the U.S.

Pompeo said that it was the “right decision” and we “got it right” to take out Soleimoni, adding, “The president had an entirely legal, appropriate and a basis, as well as a decision that fit perfectly within our strategy and how to counter the threat of malign activity of Iran more broadly.” (Video Below)

The United States has also denied a visa to Iranian Foreign Minister Mohammad Javad Zarif that would have allowed him to attend a United Nations Security Council meeting in New York on Thursday, a U.S. official said.

The Security Council meeting would have given Zarif a global spotlight to publicly criticize the United States for killing Soleimani, reported Reuters.

.@SecPompeo does anyone believe this kind gentleman, great diplomat was on a piece mission in Baghdad? 😂 pic.twitter.com/O02IZQtDZ7

(Related: Sen. McConnell: “Must Democrats Distaste For This President Dominate Every Thought That They Express & Every Decision They Make?”)

President Trump Renews Attacks On Schiff, Slams The Whistleblower & His Lawyer: They “Should Be Investigated For Fraud”