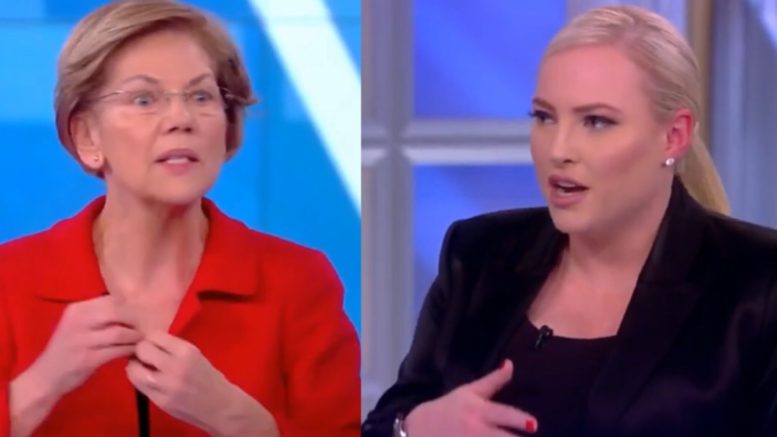 Senator Elizabeth Warren (D-MA) spoke with “The View” Tuesday and was grilled by Meghan McCain over the way the Massachusets Senator described Gen. Qassem Soleimani, who was killed in an American airstrike at Baghdad International Airport Thursday night.

“You issued a statement calling Soleimani a murderer. Later you issued a second statement saying he was an ‘assassination of a senior foreign military official'”, McCain said to Warren.

“This is a man who is obviously responsible for hundreds of American troops’ deaths, carnage, we can’t even imagine,” Meghan McCain continued.

“This isn’t a change,” Senator Warren said of her two statements. “They’re truth.”

Warren then pointed to former Iraqi dictator Saddam Hussein, whom she admitted was a “bad guy” but didn’t warrant the United States going to war. “Going to war in Iraq was not in the interest of the United States. We lost thousands of American lives. It cost us here at home. It has cost us around the world. It has been a part of this cost in the Middle East that has ended up with millions of people, who’ve lost their lives, who’ve been injured, who’ve been displaced,” she said.

“The question for the president of the United States is to understand what is going on, have an overall strategy, and pick an appropriate response,” Warren added.

Senator Warren didn’t answer McCains’ question and “The View” host tried again. “So, do you think he’s a terrorist?” she asked Warren. (Video Below)

After twice describing Soleimani as “part of a group” designated as terrorists, Warren said “of course” Soleimani was himself a terrorist.

“Soon after the news broke, one of our distinguished colleagues made a public statement that rightly called Soleimoni a murderer and then, amazingly walked that message back when the far-left objected to the factual statement. Since then, I believe all her criticism is directed at our own president,” Kentucky Senator Mitch McConnell said Monday on the Senate floor of Warren.