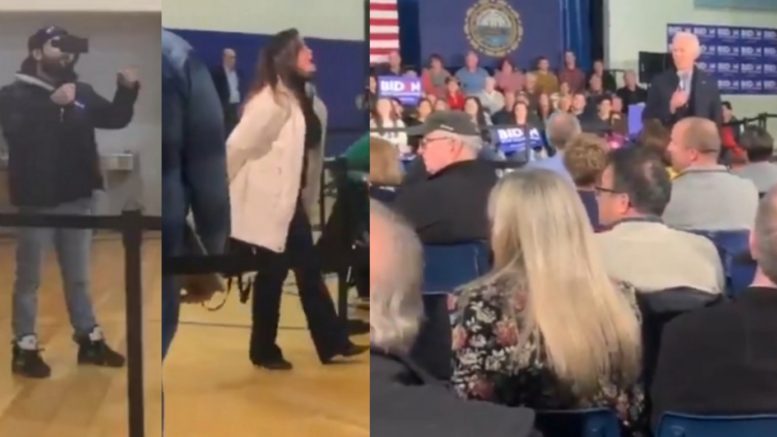 Democrat Presidential candidate Joe Biden was interrupted by a pair of protestors while speaking at a campaign event in Peterborough, New Hampshire.

Both protestors yelled numerous things at Biden, including “pervert” and “Quid Pro Joe” before leaving the event. A bystander at the event captured the situation on camera and uploaded it to social media soon after, where it went viral.

“You touch kids on video and women. We don’t need another old white man running for President,” a man is heard yelling at Biden.

Right after saying that, he was interrupted by a female protestor, who yelled something before calling him “Quid Pro Joe.” The female could be seen walking towards the exit as the film shuts off. Video Below

A protester at town hall in Milford, NH yells at Biden: "Don't touch kids, you pervert!!!"

Related Article:  Kellyanne On Biden Touching Accusations: ‘If Anyone Types In ‘Creepy Uncle Joe Videos’, You Come Up With A Treasure Trove’

Right as he was on the verge of announcing his bid for President, Biden found himself at the center of controversy as a former Nevada lawmaker accused Biden of inappropriately touching and kissing her. Lucy Flores was running for Lieutenant Governor at the time she alleged the incident happened.

The incident opened a can of worms to other questionable scenarios caught on camera and involving the former Vice President’s interactions with females of a range of ages.

Soon after Lucy Flores’s allegation surfaced, Kellyanne Conway said in an interview with Fox News: “If anybody just types in ‘Creepy Uncle Joe Videos,’ you come up with a treasure trove. Far more evidentiary information and videos than we saw when Brett Kavanaugh’s nomination was trying to be derailed and him, as an individual and family, being destroyed by folks who had no evidence of what allegedly happened 34 years earlier.”