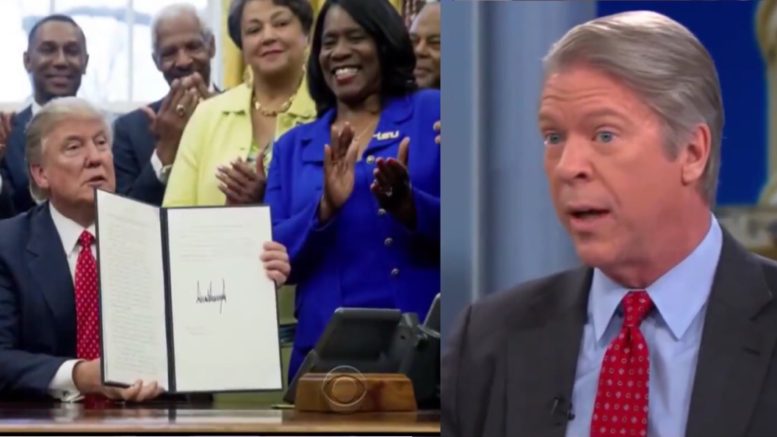 Sunday on CBS, chief Washington correspondent Major Garrett, praised President Donald Trump for helping minority communities and listed some of the policies the president has put into place.

“It can be fairly said that this administration, because of President Trump’s quiet prodding, has done quite a bit for funding of historically black colleges and universities, the First Step Act, which was a massive first step toward criminal justice reform,” Major Garrett explained.

“Just a couple of weeks ago, in this newly signed defense bill, there is a law that says if you are seeking work for the federal government or a contractor, you don’t have to be asked and you cannot be asked about your criminal history, until right toward the end,” Major Garrett continued.

“That is a legacy, on the agenda side, that almost any president, after 3 years, would want to claim,” Garrett expressed. [Emphasis added]. (Continued Below)

Fox News reported, in a recent interview with CNBC, BET founder and billionaire Robert Johnson suggested that Trump’s reelection is “his to lose.” As a prominent black businessman and faithful Democrat, Johnson’s views are noteworthy. He cites the increase in black employment and the strong economy as helping Trump, as well as the leftward lurch of Democrats. “I do not see anybody in the Democratic primary race today that is enough in the center where I believe most of the voters are, and particularly where most African Americans are,” Johnson said.

Two polls, one by Emerson College and one from Rasmussen, put black support for Trump at or above 34 percent. Those soundings so alarmed Trump critics that a horrified CNN host described the two polls as “fake” and sarcastically suggested that only Kanye West and other black Trump surrogates had been surveyed, as per Fox News.

The Emerson poll showed 34.5 percent of black registered voters supported the president, up from 17.8 percent a month earlier. The poll had a margin of error of plus or minus 8.3 points. Rasmussen showed the president with 34 percent approval from blacks. (Video Below)

In October, the Trump team launched Black Voices for Trump in Atlanta, with the president vowing to “campaign for every last African American vote in 2020.” In that inaugural address, the president told several hundred African American supporters, “the Democratic Party already left you a long time ago.” He added, “If you don’t want liberal extremists to run your lives, then today we say welcome to the Republican Party.”

(Related: Candace Owens Projects A “Trump 2020 Landslide” In Her Reaction To The Impeachment Resolution)