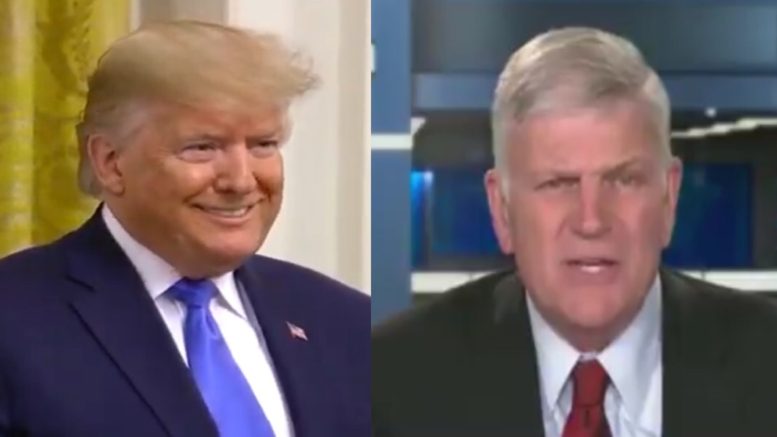 Tuesday, Rev. Franklin Graham spoke with Fox News‘ “Fox & Friends First,” where he pushed back at Christianity Today’s editorial that supports impeachment and called for President Donald Trump to be removed from office.

Billy Graham founded the magazine 60 years ago, but his son, Franklin Graham, dismissed the article as being a left-leaning magazine that would have disappointed his father.

“This magazine– this left-leaning magazine, my father did start 60 years ago, but is so far removed now from what my father founded the magazine to be,” Rev. Graham said. “And for them to say the president should be removed when he has done more for Christians and evangelicals than any president in my lifetime, I just find it to be crazy. The man’s just lost his mind.”

“For Christianity Today to suggest that he should step down, why?” Graham asked. “What [Trump’s] done– so much for our country. Just because this is what Nancy Pelosi and a few people on the left want. And then, this magazine is following in step with the leftist agenda. My father would be very disappointed. My father actually had nothing really to do with this magazine for the last 25, 30 years.”

Rev. Graham believes the mainstream media used the editorial to try to divide the evangelical community for political purposes, however, he predicted Trump voters would remain loyal, despite Christianity Today’s editorial.

“Listen, the people that voted for Trump are going to vote for him next time. And there’s going to be a whole lot more vote for him this next time because he has delivered,” he continued.

(Related: Pastor Jeffress: “There Are 25 Million Evangelical Christians Who Are Not Yet Registered To Vote”)

“He made promises, and he’s delivering on those promises. So many presidents make promises, and you never see anything fulfilled. This man does it, and I find him to be an extremely honest man. Every time he tells me he is going to do something, he does it. I find it very refreshing,” Rev. Graham added. (Video Below)

President Trump’s re-election campaign announced the creation of an ‘Evangelicals for Trump’ coalition.

The Trump 2020 campaign said in an email Friday that the president will launch the “Evangelicals for Trump” group at an event in Miami on January 3, 2020. “The event will bring together Evangelicals from across the nation who support President Trump’s re-election,” said the announcement.

WATCH: @Franklin_Graham says President Trump "has done so much for our country."

His father Billy Graham "would be very disappointed" with the magazine he started in 1956, Christianity Today, "falling in step with the leftist agenda." pic.twitter.com/rzvJjuPh92

"There's going to be a whole lot more [people] who vote for [Trump in 2020] because he's delivered," says @Franklin_Graham.

"So many presidents make promises and you never see any of them fulfilled. This man does it."#PromisesMadePromisesKept #KeepAmericaGreat pic.twitter.com/mJZO80O0JL

(Related: Pastor Jeffress Exhibits Why Evangelical Christians Are ‘Seething With Anger’ Towards Dems: They’re Attempting To ‘Steal This Presidency’)