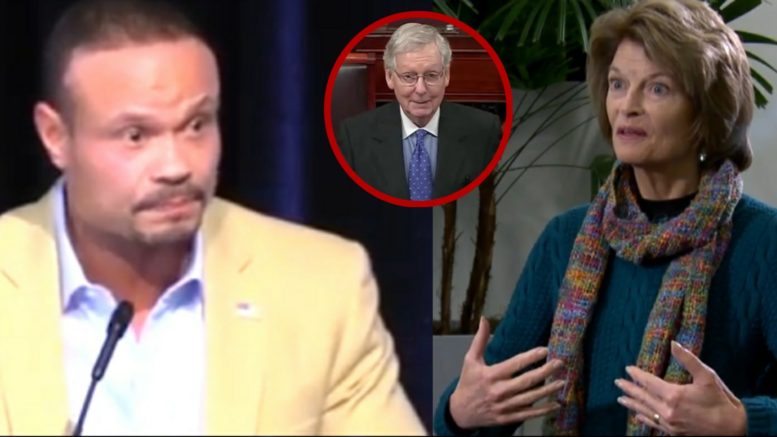 Political commentator Dan Bongino issued a reaction in regards to Senator Lisa Murkowski (R-AK) saying she was “disturbed” when Senate Majority Leader Mitch McConnell indicated there would be “total coordination” between the White House over the upcoming presidential impeachment trial.

Murkowski made the remarks during an interview with the Alaskan news station “KTUU” that aired on Christmas Eve.

Before the House voted to impeach President Trump, McConnell told Hannity: “…We’ll be working through this process, hopefully in a very short period of time in total coordination with the White House counsel’s office and the people representing the President in the well of the Senate.”

In response to McConnell’s statement, Senator Murkowski told KTUU, “And in fairness, when I heard that I was disturbed.”

“To me it means that we have to take that step back from being hand in glove with the defense, and so I heard what leader McConnell had said, I happened to think that that has further confused the process,” she added.

Dan Bongino advised Americans to simply “ignore” Murkowski after seeing a write-up about her remarks. See Below

“Murkowski forfeited her principles a long time ago,” Bongino said in a tweet.

“Her words are meaningless and her actions are always driven by selfish motives,” Bongino declared. “Ignore her.” See Below

Lisa Murkowsi, one of the Democrat Party-media’s reliably favorite GOP senators, and for good reason https://t.co/D66kxkNW5x