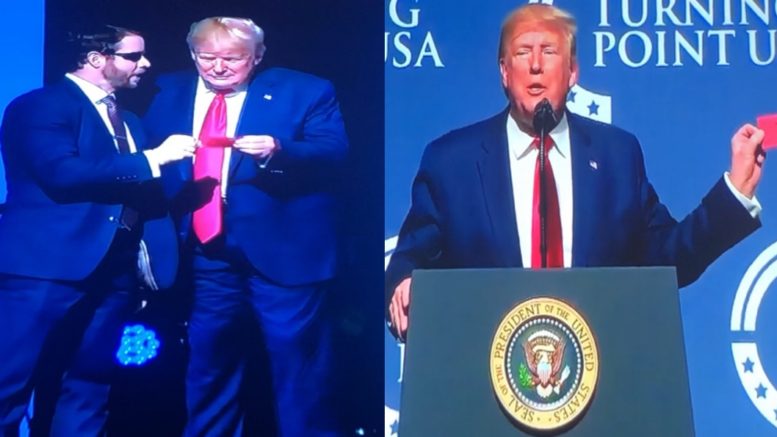 “This is a very capable person who’s really developed a voice that you rarely develop as such a young person and so new to this whole political game. But, I’m new too, Dan Crenshaw. I’m new too. … You are great! What a voice you’ve developed,” President Trump said as he pointed to the Texas Congressman in the audience.

“You did it quickly. Some guys are in Congress for 40 years and they don’t have your voice. … I mean people are listening to you. Great job.” the President expressed.

“And while Dan is here, what kind of great support did we have from those incredible Congressmen and women this week?” President Trump asked as he praised the Republicans who voted “no” against impeachment.

The President then told Crenshaw to come up on stage as it appeared the Texas Congressman, in the audience, was signaling that he wanted to give Trump something: “Come up here, Dan. What do you have?” he asked. (Continued Below)

The Commander in Chief walked to the end of the stage to greet Rep. Crenshaw to see what it was that the congressman wanted to give him, and the audience erupted in “USA” chants.

The Texas Congressman ran up the ramp to the stage, shook President Trump’s hand, and then gave him a red slip of paper. Trump walked back to the podium to announce what it was.

“I said this better be good Dan. That took a long time. I said what the hell is it, Dan? He said, ‘It’s a no vote on impeachment,'” the President declared as he held it up, then put it in his jacket pocket. “I’ll save that Dan.” (Video Below)

(Related: Diamond & Silk On Impeachment: Dems ‘Tried To Be The Grinch That Stole Christmas…But It Backfired In Their Face’