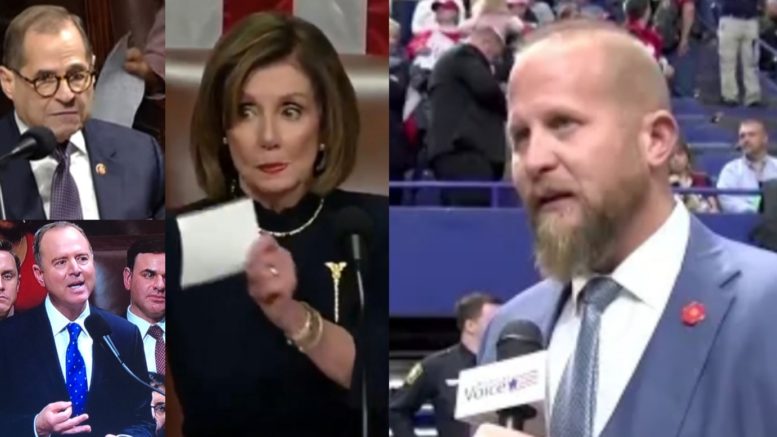 Parscale posted an official statement from the campaign on social media just as the results of the House votes became official, and while President Trump held a jam-packed rally in Battle Creek, Michigan.

“The contrast between President Trump and the Democrats couldn’t be more clear. While the President rallied with tens of thousands of citizens in Michigan and celebrated the greatness and success of America, Democrats in D.C. completed their cold, calculated, and concocted 3-year impeachment sham and voted against 63 million Americans,”Parscale said in an official statement on behalf of President Trump’s 2020 campaign.

“And the only part of the vote that was bipartisan was in opposition,” he declared.”The President is just getting stronger while support for the Democrats’ political theater has faded.”

“Undeterred, President Trump keeps racking up victories for the American people, who will respond by resoundingly re-electing him next November,” he concluded. Continued Below

Related Article: Rep. Reschenthaler: “I Would Prosecute Schiff For Abuse Of Power…& The Democrats For Obstruction”

In a seperate post, Parscale slammed House Democrat leaders for failing to convince everyone in their party to vote for impeachment.

“Nancy Pelosi, Jerry Nadler and Adam Schiff couldn’t even convince all the Democrats to vote for impeachment, but they did it anyway, Parscale said. “They know a totally partisan impeachment does irreparable damage to America, but they don’t care. They don’t put America First!” See Below

Nancy Pelosi, Jerry Nadler and Adam Schiff couldn’t even convince all the Democrats to vote for impeachment, but they did it anyway. They know a totally partisan impeachment does irreparable damage to America, but they don’t care. They don’t put America First!

Parscale then released data in regards to attendees of the Battlecreek rally and revealed that by 10:13 PM EST, the Trump campaign raised over $5 million dollars despite the highly-publicized day for Democrats’ “impeachment hoax.”

We leave you with those tweets along with President Trump’s reaction to the impeachment votes.

✅ 15% have voted in only one of the last four elections

Incredible fundraising numbers!@realDonaldTrump has raised over 5M dollars (still growing) today as Americans use their wallet to show support against @SpeakerPelosi’s impeachment hoax!