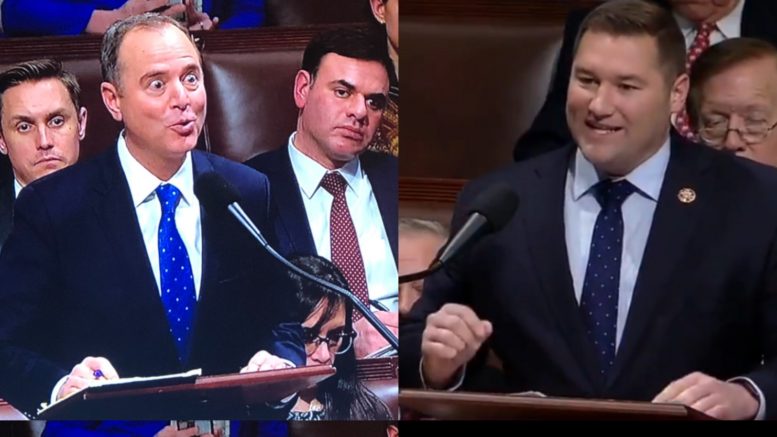 Congress is expected to vote along party lines to impeach President Trump for abuse of power and obstruction following the debate. However, Reschenthaler suggested it’s Adam Schiff and Democrats who are truly guilty of the two charges expessed in articles of impeachment.

Reschenthaler began by stating that the reason Democrats chose to impeach President Trump is because they are “terrified they can’t beat him on the merits,” so they are “caving to their far left radical base and are using the thoughts and feelings and assumptions of some unknown bureaucrats rather than relying on facts and law.”

“Let me be clear, this is nothing more than a policial hit job,” Reschenthaler said before stating his experience as a prosecutor in the Navy,  a defense attorney in the Navy and a district judge in his hometown.

“And let me tell you, as a lawyer, I would defend this case every day of the week,” the Congressman from Pennsylvania said. “As a judge, I would dismiss this on day one for lack of merit . There’s no prima facie case here.”

“I’d tell you who I’d prosecute though,” Reschenthaler said. “I would prosecute Adam Schiff for abuse of power.” Video Below

"As a lawyer, I would defend this case every day of the week. As a judge, I would dismiss this case for lack of merit. … I'll tell you who I will prosecute, though. I would prosecute @RepAdamSchiff for abuse of power…and @TheDemocrats for obstruction," pic.twitter.com/hD1TmL6kjE

Ken Starr On Dems’ ‘Anti-Constitutional’ Impeachment: “The Senate Is Utterly Without Jurisdiction To Try Donald Trump”