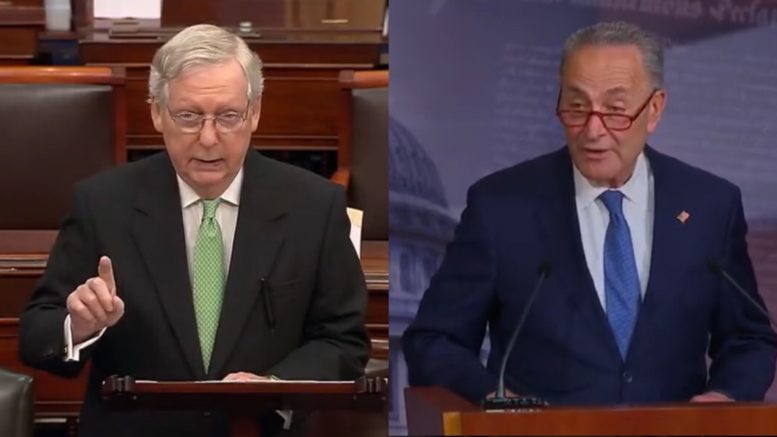 McConnell pushed back at the notion of an extensive impeachment trial if it moves to the Senate, which would feature several new witnesses, and rejected the push as a “fishing expedition” that would set a “nightmarish precedent”.

“The Senate is meant to act as judge and jury, to hear a trial, not to re-run the entire fact-finding investigation because angry partisans rushed sloppily through it. The trajectory that the Democrat leader wants to take us down before he’s even heard opening arguments could send a nightmarish precedent for our institution,” Senator Mitch McConnell said.

On Sunday, Senator Schumer wrote a letter to Senator McConnell calling for the Senate to subpoena new documents and call witnesses who had been blocked with executive privilege by the White House during the impeachment inquiry in the House.

Senator McConnell explained that it was the duty of the House to investigate as their role, not a mission for the Senate and warned that fulfilling Schumer’s proposal to do house lawmaker’s “homework” could invite a string of future “dubious” and “frivolous” impeachment inquiries.

“If the Senate volunteers to do House Democrats’ homework for them, we will only incentivize an endless stream of dubious partisan impeachments in the future. And we will invite future House’s to paralyze future Senates with frivolous impeachments at will,” Senator McConnell explained. (Continued Below)

The Senate Majority Leader stressed the fact-finding mission should have been completed during the Democratic-led impeachment inquiry and accused the House majority of a “rushed process”. He noted that Schumer is now looking “to make Chairman Schiff’s sloppy work more persuasive than Schiff, himself, bothered to make it”.

“Why does the Democratic leader here in the Senate want to predetermine the House manager’s impeachment witness requests for them before the House has even impeached the President? Might he, just might he coordinating these questions with people outside of the Senate?” Senator McConnell asked of Schumer.

“We don’t create impeachments over here, we judge them. The House chose this road, it’s their duty to investigate. It’s their duty to meet the very high bar for undoing a national election. And Speaker Pelosi herself once said, ‘It is the House obligation to build an ironclad case to act’. If they fail, they fail. It’s not the Senate’s job to leap into the breach and search desperately for ways to get the guilty. That would hardly be impartial justice,” he said. (Continued Below)

“The fact that my colleague is already desperate to sign up the Senate for new fact-finding, which Democrats themselves were too impatient to see through, well, that suggests something that even Democrats who do not like this president, are beginning to realize how dramatically insufficient the House’s rushed process has been,” Senator McConnell added.

“If House Democrats’ case is this deficient, this thin, the answer is not for the judge and jury to cure it over here in the Senate. The answer is the House should not impeach on this basis in the first place. But if the house plows ahead– if this ends up in the Senate, we certainly don’t need jurors to start brainstorming witness lists for the prosecution and demanding to lock them in before we even heard opening arguments,” the Senate Majority Leader said.

On Monday night, Congressman Lee Zeldin (R-NY) took to Twitter and directly asked, “Do Senate Dems realize what they are admitting to with their whining today about how there aren’t enough facts in front of them for impeachment & now need new witnesses?”

“House Dems are going to impeach POTUS on a case that even Senate Dems are admitting isn’t strong enough as is,” Zeldin added. (Video Below)

Do Senate Dems realize what they are admitting to with their whining today about how there aren’t enough facts in front of them for impeachment & now need new witnesses? House Dems are going to impeach POTUS on a case that even Senate Dems are admitting isn’t strong enough as is.

Sarah Sanders RIPS Dems & Exposes Their True Colors: ‘I’m Pretty Sure They Don’t Even Like America’