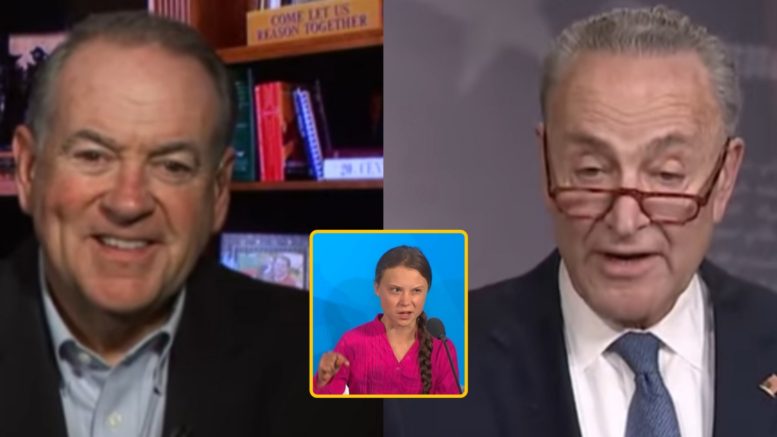 Former Arkansas Governor Mike Huckabee issued a bold reaction to Senator Chuck Schumer’s request for “a fair trial” in the Senate as the House is poised to pass two articles of impeachment against President Trump this week.

Schumer wrote a letter to all Senators where he pleaded for fairness and demanded live testimony from four witnesses. He later doubled down on the contents of his letter at a press conference.

“Senate Democrats believe strongly the trial must be fair and it’s very important that the American people judge it to be fair,” Schumer said during his press conference. “A fair trial is one where senators get all the facts. And one that allows them to adjudicate the case impartially.”

Schumer then referred to his letter, where he demanded to hear live testimony from four witnesses, which are as follows: acting White House chief of staff Mick Mulvaney, former National Security Adviser John Bolton, Associate Director for National Security at the Office of Management and Budget Michael Duffey, and senior adviser to the acting White House chief of staff, Robert Blair.

“The four witnesses we propose have direct knowledge of why the aid to Ukraine was delayed. They might present exculpatory evidence that helps President Trump. It may be incriminating against the president. But they should be heard,” Schumer said.

Huckabee said, “Well, to quote Greta Thunberg, I would say to Chuck Schumer, ‘How dare you!'”

“He said nothing during the entire time that the House was rejecting any idea that the Republicans would get a chance to hear from key witnesses. And now Chuck Schumer, seriously, is demanding that he gets to call witnesses for this sham?” Huckabee questioned.

“I’m embarrassed for him, Harris. I can’t believe that he would have the audacity to think people would take him seriously knowing that it was his party that refused to let witnesses — that are truly material witnesses to this process — be heard over in the House Judiciary Committee,” Huckabee proclaimed. Video Below

Tucker: ‘Trump Was Right… This Isn’t a Conspiracy Theory’ – ‘Democrats Were Spying on Donald Trump’