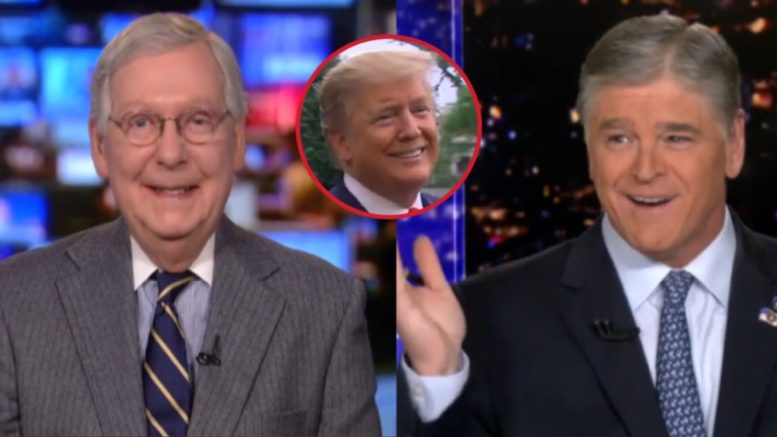 The Democratic-led House Judiciary Committee voted on Friday the 13th, to adopt their two articles of impeachment, alleging abuse of power and obstruction of Congress, with a straight party-line vote of 23-17. A final roll call in the full House is expected next week.

During the interview, Senator McConnell pointed out that Democrats have been wanting to impeach President Trump for three years. “The first headline in The Washington Post, before the president was inaugurated, was they were gonna impeach him. Well, they finally got around to it,” he said.

He noted both of the articles drafted in the House are “pretty weak stuff”, but said that if it moves to the Senate “under the rules of impeachment, the Senate then turns to it, there’s no option and it’s the sole business until we finish.”

“How we can impact that is really with 51 votes. The Chief Justice is in the Chair– I don’t expect the Cheif Justice to try and tilt the playing field either way. We’ll listen to the opening arguments by the House prosecutors. We’ll listen to the President’s lawyers respond, and then we’ll have to make a decision about the way forward. And everything I do during this, I’m coordinating with White House counsel. There will be no difference between the President’s position and our position as to how to handle this, to the extent that we can,” Senator McConnell explained.

“We have no choice but to take it up. We’ll be working through this process, hopefully in a fairly short period of time and total coordination with the White House counsel’s office and the people that are representing the president, as well as the Senate,” he added. (Continued Below)

“The case is so darn weak coming over from the House. We all know how it’s gonna end. There’s no chance the President’s going to be removed from office,” Senator McConnell confidently told Hannity. [Emphasis added].

“My hope is that there won’t be a single Republican who votes for either of these articles of impeachment. And Sean, it wouldn’t surprise me if we got one or two Democrats. It looks to me over in the House, the Republicans seem to be solid and the Democrats seem to be divided,” he noted.

“This is a thoroughly political exercise. It’s not like a courtroom experience, It’s a political exercise. They’ve been trying to do this for three years. They’ve finally screwed up their courage to do it,” Sen. McConnell said. “It looks to me like it may be backfiring on them particularly in swing districts that the Speaker’s party managed to win in order to get the majority. Most of the nervousness I see on this issue with politicians since it’s a political process is on the Democratic side.” (Video Below)

“If you know you have the votes, you’ve listened to their arguments on both sides, and believe the case is so slim, so weak, that you have the votes to end it, that might be what the president’s lawyers would prefer. And you could certainly make a case for making it shorter than rather longer since it’s such a weak case,” Senator McConnell added.

(Related: Lou Dobbs On Impeachment: “It Is Going To Be A Stain On The Record Of The Radical Dems”)