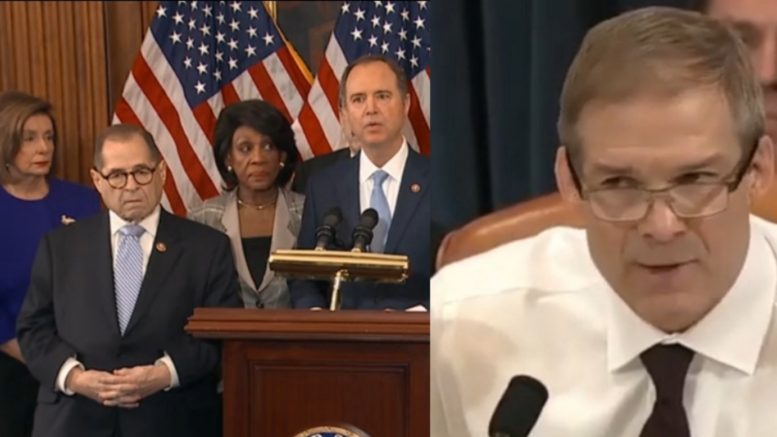 Congressman Jim Jordan unloaded on Democrats during the House Judiciary Committee’s Wednesday debate where members on both side of the aisle considered articles of impeachment against President Trump.

Jordan accused Democrats of weaponizing the government against the President and his supporters before urging committee members who are in favor of impeachment to reconsider their position.

Jordan said Democrats “can’t stand the fact that President Trump is actually draining the swamp and doing what he said he would do and most importantly getting results.”

He then pointed out several successes of Trump’s presidency including, “taxes cut, regulations reduced, economy growing at an unbelievable pace, lowest unemployment in 50 years, Gorsuch and Kavanaugh on the Supreme Court, out of the Iran deal, embassy in Jerusalem, hostages back from North Korea, oh, and by the way, a new NAFTA agreement coming any day now.”

Jordan went on to give multiple examples of how Democrats don’t like Trump supporters and declared, “They don’t like us. That’s what this is about.”

A few years ago, it was the IRS. More recently, it was the FBI. And now it’s the impeachment power of Congress, going after 63 million people and the guy we put in the White House,” Jordan proclaimed. Video Below

Comey Asks For A ‘Quick’ Apology From His Critics, Brit Hume Turns The Tables: How About Sorry I Violated Both Policy & Contract?