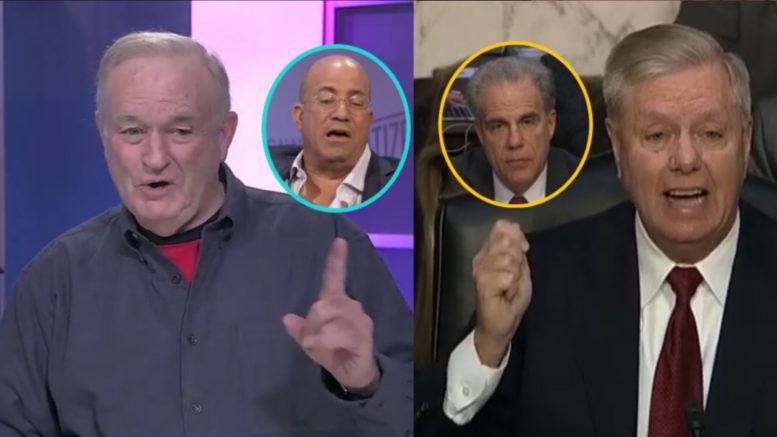 Wednesday in the Senate Judiciary Committee, Department of Justice Inspector General Michael Horowitz testified before the committee pertaining to his findings of the FISA report that was released on Monday.

As the hearing began, the chairman of the committee, Lindsey Graham (R-SC), gave nearly an hour-long opening statement, where he laid out Horowitz’s report and his findings in detail before the mainstream media could spin it, and before narrow questioning from Democratic Senators would be able to also change the narrative to the public.

Interestingly enough, as reported by Bill O’Reilly and others on social media, CNN and MSNBC blacked out Senator Lindsey Grahams’s opening, but conveniently began to broadcast when California Democrat Senator Diane Feinstein gave her opening.

Senator Graham summed up the Horowitz’s report thoroughly, and though the DOJ watchdog claimed he did not find bias, the leftwing media and Feinstein jumped on that conclusion to give substance to their base.

Inspector General Michael Horowitz, after reviewing a million documents and interviewing 100 people, concluded that he “did not find documentary or testimonial evidence that political bias or improper motivation influenced the decisions to open” the investigations into Trump campaign aides, as per the report.

Attorney General William Barr said during an interview with NBC however, that Horowitz didn’t look very hard and that the inspector general accepted the FBI’s explanations at face value. “All he said was, people gave me an explanation and I didn’t find anything to contradict it… He hasn’t decided the issue of improper motive,” Barr said. “I think we have to wait until the full investigation is done. And that’s the fundamental distinction what Durham is doing and what the IG’s doing. Durham is not limited to the FBI. He can talk to other agencies. He can compel people to testify.” (Continued Below)

Amid the opening of the hearing, Bill O’Reilly took to Twitter to rip leftwing cable networks who refused to broadcast Senator Lindsey Graham’s opening statement. “CNN and MSNBC refusing to run Senator Lindsey Graham’s opening statement in the Horowitz hearing. The most blatant form of media bias that I have ever seen. RIP, American journalism,” O’Reilly fired off.

“MSNBC blacked out Republican Senator Lindsey Graham but is now broadcasting Democrat Diane Feinstein in the Horowitz hearing. It is all over for NBC News as a legitimate press organization,” O’Reilly added.

Senator Marsha Blackburn (R-TN) noted: “The fact that MSNBC refused to run @LindseyGrahamSC’s opening statement uninterrupted, but is now carrying Senator Feinstein’s, is proof that political bias is not isolated to the FBI.” (Continued Below)

MSNBC blacked out Republican Senator Lindsay Graham but is now broadcasting Democrat Diane Feinstein in the Horowitz hearing. It is all over for NBC News as a legitimate press organization.