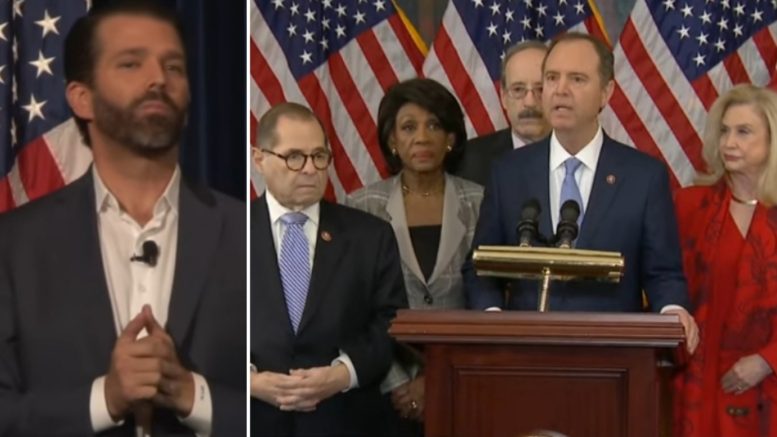 Donald Trump Jr. was on a roll Tuesday after House Democrat leaders announced articles of impeachment against President Trump.

House Democrats introduced two articles of impeachment against President Donald Trump alleging “abuse of power and obstruction of Congress” regarding his interactions with Ukraine, despite going to the court to obtain documents.

Related Article: Sen Graham: Schiff ‘May Be The Most Valuable Player For The Republican Party In The 2020 Election Cycle’

After making the announcement, Democrats left the stage without taking questions, leaving those who are strongly opposed to impeachment outraged that goverment officials were successful in their attempt to move one step closer to undoing the results of the 2016 election.

On top of trying to remove President Trump from office, Democrats have also been pushing the concept of ending the Electoral College, which was put in place by America’s founding fathers.

Tying the impeachment effort to the Electoral College, Donald Trump Jr. posted a meme titled “Coastal Impeachment Squad: This Is Why We Have The Electoral College” that showed six of the Democrats who were present at Tuesday’s press conference and pointed out something all of them have in common. See Below

All six of the Democrats in the photo, which can be seen below, are from one of two deep blue states of California or New York. The Representatives shown in the photo are as follows:

Trump Jr. captioned it: “This is why even Democrats with TDS in Middle America should not try to eliminate the electoral college. After 2024 you may still want to be able to have some say in govt… don’t be shortsighted.” Video Below

This is why even Democrats with TDS in Middle America should not try to eliminate the electoral college. After 2024 you may still want to be able to have some say in govt… don’t be shortsighted. pic.twitter.com/c7Ecy0NIvB

Speaking of the Electoral College, we leave you with a campaign video from Democrat Presidential hopeful Elizabeth Warren pushing the concept of getting “rid of it”:

My goal is to get elected—but I plan to be the last American president to be elected by the Electoral College. I want my second term to be elected by direct vote. pic.twitter.com/a2Lj2a9F0F