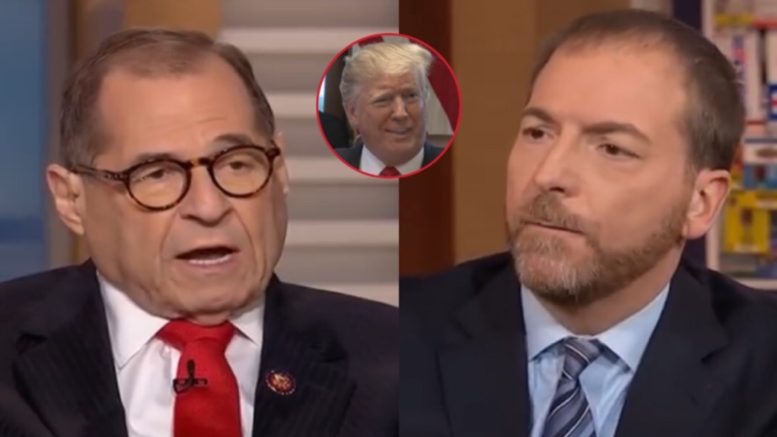 House Judiciary chairman, Jerrold Nadler (D-NY), spoke with host Chuck Todd on NBC’s “Meet The Press” Sunday where he said Democrats will bring articles of impeachment before the committee “later in the week”.

Nadler claimed in the interview with Chuck Todd that there is “overwhelming evidence that the president put himself above the country” and that there is an “urgency to proceed with impeachment.”

Asked what allegation specifically the House Judiciary chairman is describing, Nadler said, “It’s certainly an abuse of power– might be an abuse of obstruction of Congress. He refused every single document. He told everyone in the executive branch ‘do not cooperate, do not answer, do not testify.'”

“No president has ever done anything like that. So this is a defiance of the role of Congress, given by the Constitution for impeachment. But again, he put himself above the country. He sought to get foreign interference against the integrity of our election,” he claimed.

“And this is a matter of urgency because we have to make sure the next election is conducted with integrity and without foreign interference,” Nadler added. (Continued Below)

However, President Trump was entirely within his legal purview according to a treaty signed into law during the Clinton administration: Treaty With Ukraine On Mutual Legal Assistance in Criminal Matters.

“We have to call the president for his violations of the Constitution and for posing the considerable risks that the poses to the next election,” Rep. Nadler also told Chuck Todd. (Continued Below)

Asked about the “wall” of partisan objection to impeachment and if it matters, Nadler claimed, “The polling now shows that 70% of the American people are convinced that the president has done something very wrong. We are also faced with the very direct threat that this president has put himself repeatedly above the interest of the country and poses a threat to the integrity of the next election. … If he’s allowed to continue doing what he’s doing.”

Todd asked what is the consequence then, after President Trump is acquitted in the Senate, Nadler hesitated but frustratedly replied, “I don’t know how he will take acquittal. I don’t know if he’ll be acquitted. The Senators are going to have to decide in the face of an ‘abundance of contested evidence’ that the president poses a threat to our election, that he put himself above his own interests above the interest of the country. Are they going to be patriots, or are they going to partisans?”

Asked if the President is acquitted will there be a fair election in 2020, the House Judiciary chairman responded: “I don’t know. The president, based on his past performance, will do anything he can not to interfere in our election. And that is what gives us part of the urgency to proceed with this impeachment.” (Video Below)

(Related: Ted Cruz Rips Chuck Todd: “The Press Needs To Stop Being Ridiculous & Acting Like They Work For Adam Schiff”)