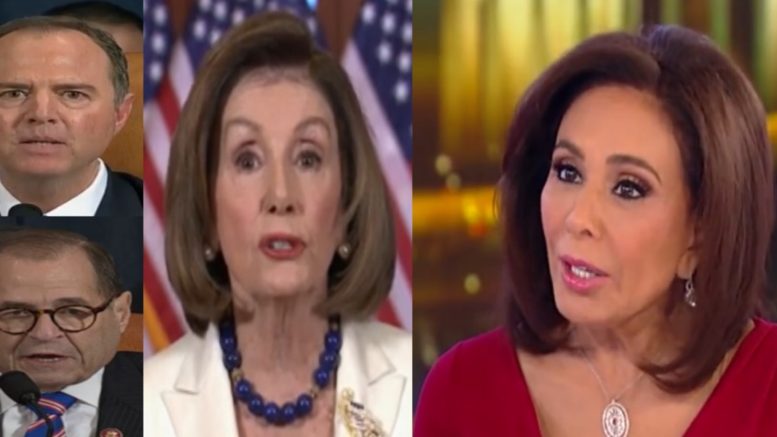 Tucker Carlson played a clip of House Judiciary Chairman Jerry Nadler (D-NY), who appeared to fall asleep during Wednesday’s hearing, to which Pirro responded by saying that she believes House Speaker Nancy Pelosi (D-CA) is hurrying the impeachment process along because public interest is dwindling.

“Everybody is going to assuming it’s is going to boomerang and it’s hurt them. But the proof is is in the fact that they had this rush to judgment, the Democrats now. Why are they rushing? Why are they not waiting for the material witnesses that they might be able to bring on to give more insight, more facts?” Judge Jeanine asked.

“Because if you remember the so-called evidence that they showed us, none of those so-called witnesses in the Intelligence Committee, had any evidence about a quid pro quo. None of the professors knew any of the facts. So what we have are just a bunch of people who hate Donald Trump,” she added.

“The people who would have some information about this — like [former National Security Adviser] John Bolton, like [Acting White House Chief of Staff] Mick Mulvaney — they don’t even want to wait for them. Why? Because they are losing their impetus now,” Pirro said. “The American public is starting to get tired of this. It makes no sense, there’s no smoking gun. So, now Nancy Pelosi is like: ‘Let’s get this done and let’s get this done right away.'”

Pirro added that she hoped the tentative Senate trial will feature testimony from Joe and Hunter Biden, Adam Schiff, Nancy Pelosi, former DNC staffer Alexandra Chalupa, and “all the players”. (Continued Below)

“You want a show? Let’s put on a show,” Pirro expressed.

“The bottom line is: There is no evidence,” she stated. “You have a bunch of Trump-hating people, [like] this female professor who’s going after Barron Trump, and people who couldn’t pass an English course, who say when the President said ‘Do us a favor because our country has been through a lot,’ [Democrats think] he’s really saying ‘Do me, the King, a favor.'”

“I think it’s constitutional. I think it’s what our founding framers intended. I think it’s every that they wanted,” the Judge sarcastically said, seemingly taking a jab at Speaker Pelosi.

“Look, this is a game of words. This is how everyone invokes prayer, the Constitution, they’re into taking ‘In God We Trust’ out of every courtroom in this country. They take prayer out of the classroom, but now all of a sudden, these bozos, ‘Oh, now we have to say a prayer all this’. Baloney! It’s hogwash,” she expressed.

“None of this has any substance to it. And the fact that they now want to dust off the Mueller report? Because they know Ukraine has no evidence, no substance to it? This is pathetic. This is a sad commentary where they’re taking away the American public’s ability to vote for a President,” Pirro added. [Emphasis added.] (Video Below)

The Judge concluded by citing a line from “Federalist No. 69,” written by Alexander Hamilton, which said impeachment is intended to be a “release valve” to prevent “the crisis of a national revolution.” Pirro said the case the Democrats are making reflects nothing of the sort.

(Related: Harmeet Dhillon On Impeachment: “It’s Time To Go To The Mattresses, This Is War”)

Pres Trump Issues Rare Praise To Reporter For Her Question At Saturday’s Briefing: “I Love Whoever You’re With…That’s Such A Nice Question”