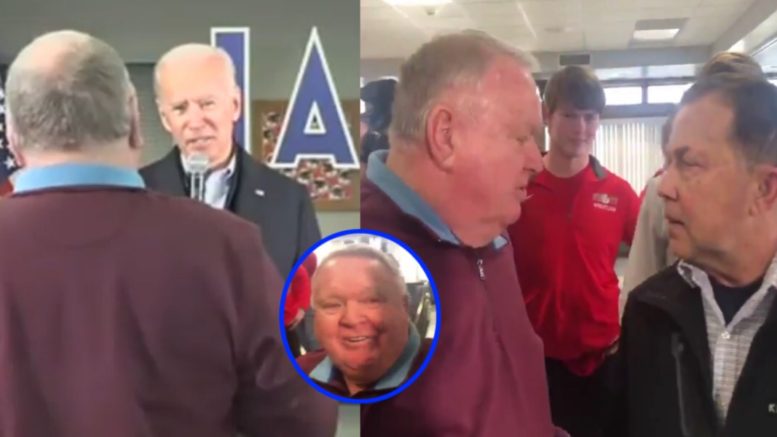 The Freedom Times reported Thursday, during one of Joe Biden’s Iowa campaign stops in Iowa, an audience member directly asked the former vice president about his son Hunter Biden’s dealings with the Ukranian gas company, Burisma.

The man told Biden that he sent his son Hunter Biden to work for Burisma and that Hunter had no experience with energy.

After some back and forth, Biden told the man, “By the way … I’m not sedentary,” before going on to challenge him to a push-up contest and other physical tests.

“You want to check my shape man, let’s do pushups together here, man,” Biden told him. “Let’s run. Let’s do whatever you want to do. Let’s take an IQ test. OK?”

When the man replied that he wouldn’t be voting for Biden in the primary, the former vice president replied: “Of course you’re not; you’re too old to vote for me!” It also appeared that Biden called the man “fat”. (Continued Below)

After the man in the audience challenged Biden and was called a “damn liar” by the former vice president, the voter had a standoff with another voter, and told him to “Stick it up your a**, fella!”

It appeared the man was possibly talking to a reporter at first and told him that Biden should “drop out of the race. Then, someone walked up to the man while he was talking and told him, “Why don’t you get out of here,” which prompted him to turn around and tell the guy to “Stick it up your a**, fella!” (Video Below)

He stood up afterward and asked the other voter if he “wanted to throw him out, and told him he has a big mouth,” adding, “It’s a free country.”

"Stick it up your ass, fella."

Voter that challenged @JoeBiden gets into confrontation with another voter that told him to "get out of here."

Democrat voter asks Biden about his son getting corrupt million$ from a Ukrainian gas company while Biden was VP.

Sen. Cruz Explains With a Graph How Biden’s Policies Have Resulted in ‘an Assault on American Energy’

McEnany on WH Official Walking Back Biden’s Taiwan Remarks: ‘These Gaffes are Alarming–They’re Weird to Watch’