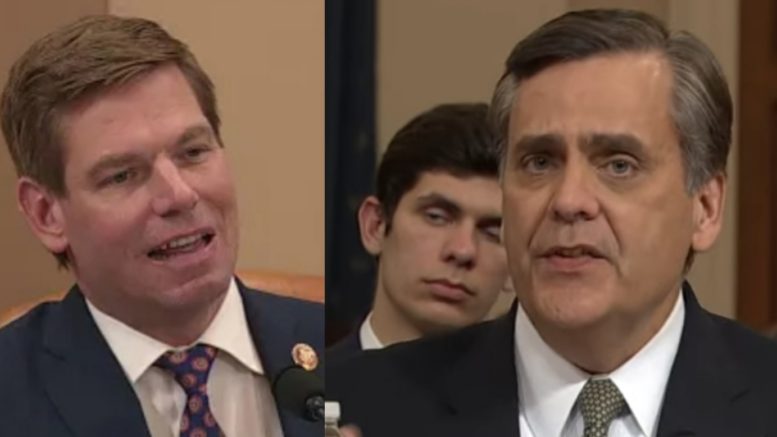 Constitutional scholar Jonathon Turley was apparently “inundated” with threats and demands to be fired from George Washington University that began before Wednesday’s impeachment hearing was complete.

Turley detailed his account of a series of “scorched earth” attacks that he claims took place all because of the testimony he gave in front of the House Judiciary Committee on Wednesday.

In an opinion piece published on The Hill’s website, Hurley began by saying, “The most dangerous place for an academic is often between the House and the impeachment of an American president.”

Turley cited his experience in the impeachment of former President Bill Clinton where he notices that intense “rancor and rage” and “stifling intolerance” blinds people to opposing views during the process.

“My call for greater civility and dialogue may have been the least successful argument I made to the committee,” Turley said in regards to Wednesday’s hearing. “Before I finished my testimony, my home and office were inundated with threatening messages and demands that I be fired from George Washington University for arguing that, while a case for impeachment can be made, it has not been made on this record.”

Turley then specifically called out Democrat Representative Eric Swalwell as an example of some of the “heated” attacks that he faced during the hearing.

“Representative Eric Swalwell of California attacked me for defending my client, Judge Thomas Porteous, in the last impeachment trial and noted that I lost that case,” Turley said. “Swalwell pointed out that I said Porteous had not been charged with a crime for any conduct, which is an obviously material point for any impeachment defense.”

“Not all Democrats supported such scorched earth tactics,” he claimed. “One senior Democrat on the committee apologized to me afterward for the attack from Swalwell.”

Turley then blasted others who he says “relished seeing my representations of an accused federal judge being used to attack my credibility.”

“Indeed, Rachel Maddow lambasted me on MSNBC for defending the judge, who was accused but never charged with taking bribes, and referring to him as a ‘moocher’ for the allegations that he accepted free lunches and whether such gratuities, which were not barred at the time, would constitute impeachable offenses,” Turley said.

“Washington Post columnist Dana Milbank expanded on this theme of attacking my past argument,” he added.

Turley then declared that he stands by his “objection” to Democrats’ basis for impeaching President Trump that he says is “comparably thin compared to past impeachments.”

“My objection is not that you cannot impeach Trump for abuse of power but that this record is comparably thin compared to past impeachments and contains conflicts, contradictions, and gaps including various witnesses not subpoenaed. I suggested that Democrats drop the arbitrary schedule of a vote by the end of December and complete their case and this record before voting on any articles of impeachment. In my view, they have not proven abuse of power in this incomplete record,” Turley said.

In ending, here his video of Turley facing Congressman Ratcliffe, where he admits he has not seen enough evidence to impeach President Trump:

Watters: ‘This Involves the Entire Biden Family & Most Importantly, the President of the United States’