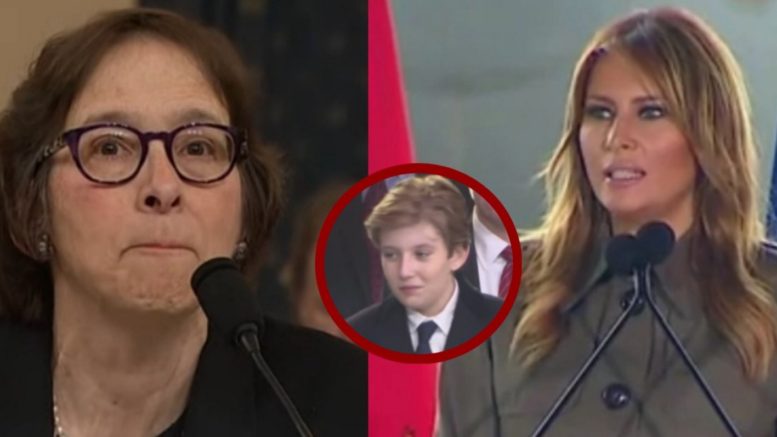 Karlan had been asked to describe the differences between a president and a king when she brought up the First Son’s name in her answer Wednesday.

Soon after Karlan’s statement, Melania Trump issued a rare rebuke on Twitter, to which the First Lady’s words were read aloud during the hearing, and then entered into the record by Rep. Mike Johnson (R-LA).

“A minor child deserves privacy and should be kept out of politics,” tweeted the First Lady, who is traveling back to D.C. from London.

“Pamela Karlan, you should be ashamed of your very angry and obviously biased public pandering, and using a child to do it,” Melania firmed stated. (Continued Below)

Prior to First Lady Melania Trump’s reaction, the White House tweeted: “Democrats are calling as witnesses the kind of people who would name the minor child of the President as a punchline in a committee hearing”, and attached a video of Rep. Matt Gaetz (R-FL) who ripped Karlan during the hearing for using Barron Trump’s name.

“Let me also suggest that when you invoke the president’s son’s name here, when you try to make a little joke out of referencing Barron Trump, that does not lend credibility to your argument, it makes you look mean,’ Gaetz fired off.

“It makes you look like you’re attacking someone’s family– the minor child of the president of the United State’s family,” he added. (Video Below)

The White House tweets Rep. Matt Gaetz, who called out Pamela Karlan for using the First Son’s name during the hearing:

Democrats are calling as witnesses the kind of people who would name the minor child of the President as a punchline in a committee hearing. pic.twitter.com/lyqRxVXKsD

Glad to help ensure @FLOTUS' response to Prof. Karlan's shameful attack on her family is included in the official record of today's #ImpeachmentHearing pic.twitter.com/isEoGFzEVX

Rep. Gaetz also went after Karlan for making Democratic political donations, including giving $2,000 to President Trump’s 2016 rival, Hillary Clinton. He asked why Karlan had given so much to Clinton and not subsequent Democratic candidates.