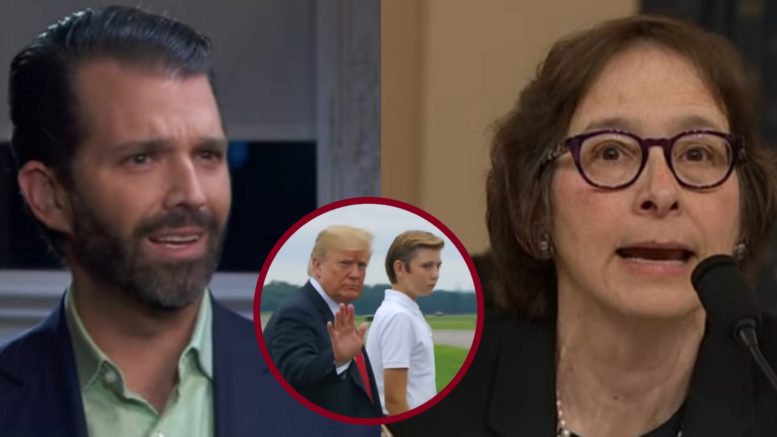 During Wednesday’s formal impeachment hearing, Professor Pamela Karlan drew outrage from Trump supporters and the Trump family when making a point that included the name of the President’s son, Barron Trump.

Karlan had been asked to describe the differences between a president and a king when she brought up Barron’s name in her answer.

Soon after Karlan’s statement, Melania Trump issued a rare rebuke on Twitter, to which Donald Trump Jr. amplified with remarks of his own.

“A minor child deserves privacy and should be kept out of politics. Pamela Karlan, you should be ashamed of your very angry and obviously biased public pandering, and using a child to do it,” Melania said in a tweet.

Trump Jr. retweeted Melania’s statement and defended his younger brother against the cheap shot taken by Karlan. See Below

“Remember only children of Liberals (even the 50 year old children) are off limits,” Don Jr. sarcastically stated in his reply to Melania.

“That a 13 year old is fair game for partisan hacks on a national platform shows you all you need to know about the new left and who is now running the ship,” he declared. See Below

Trump Jr. then corrected The View’s coverage of Melania’s response to Karlan, and exposed campaign contributions made by the professor to Elizabeth Warren’s campaign.

He then posted a screen shot of $1,500 in contributions Karlan made to Senator Warren’s campaign and captioned it: “I get that you hacks would defend that BS over a mother defending her 13 year old child being used for ridicule on national TV because you’re partisan as well, but any other parent sees it for how vile it and you truly are.”

I get that you hacks would defend that BS over a mother defending her 13 year old child being used for ridicule on national TV because you’re partisan as well, but any other parent sees it for how vile it and you truly are. https://t.co/wGoJY4IJUw pic.twitter.com/T3Jcl1TE2M

We leave you with that tweet, along with video of Professor Karlan making her remarks.

I guess this explains why this partisan “scholar” it would go on national TV and try to make a joke out of a 13-year-old child. Obviously no bias here🙄 GTFO with this nonsense already. pic.twitter.com/3QdN1nju4h