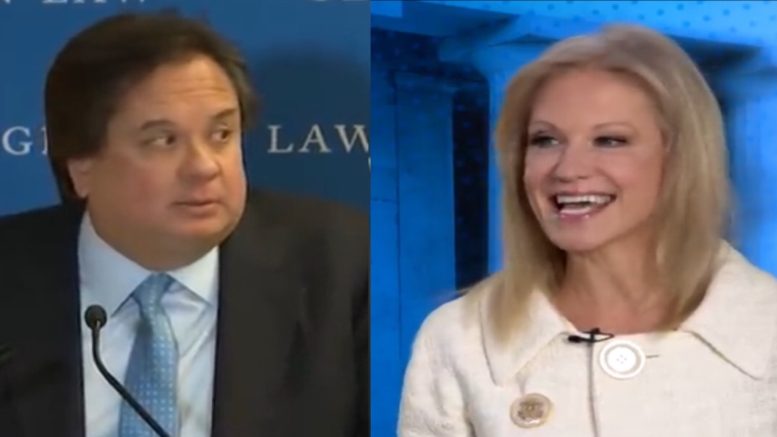 The Freedom Times previously reported about a resurfaced video from Joe Biden’s days as Vice President that shows him reminiscing his experience with children while serving as a lifeguard at a public pool that was named after him. His remarks came during a June 2017 speech at a pool in Wilmington, DE, that was renamed the Joseph R. Biden Jr. Aquatic Center in honor of his connection to the pool.

On Monday, however, George Conway took a direct shot at his wife on Twitter, Counselor to the President Kellyanne Conway, while knocking President Donald Trump over his request for Ukraine to investigate former Vice President Joe Biden’s dealings with Ukraine.

Kellyanne Conway tweeted the 2017 clip of Biden that had surfaced on social media, in which Biden described how children would rub his wet leg hair back when he was a lifeguard at a Delaware pool in his younger days.

In the clip of his speech that has gone viral, Biden said: “And by the way, you know, I sit on the stand and it gets hot — I got hairy legs that turned…blonde in the sun. And the kids used to come up and reach in the pool and rub my leg down…and watch the hair come back up again. So, I learned about roaches. I learned about kids jumping on my lap, and I’ve loved kids jumping on my lap.”

“We need Ukraine’s help to defeat THIS guy?” the counselor to the President wondered. (Continued Below)

Related: Kellyanne On Biden Touching Accusations: ‘If Anyone Types In ‘Creepy Uncle Joe Videos’, You Come Up With A Treasure Trove’

George Conway has been an outspoken critic of Trump on Twitter and in recent weeks has taken not-so-veiled shots at his pro-Trump spouse over her loyalty to the president, agreeing with another Twitter user that she is “both” an “enabler” as well as a  “cheerleader” for Trump, as reported by Fox News. (Continued Below)

In March, Kellyanne Conway gave her take on allegations against Joe Biden after an interview aired with former Nevada lawmaker, Lucy Flores, who accused Biden of inappropriately touching and kissing her. Kellyanne said: “If anybody just types in ‘Creepy Uncle Joe Videos,’ you come up with a treasure trove. … I think Joe Biden has a big problem here because he calls it affectionate handshakes. His party calls it completely inappropriate.”

We need Ukraine’s help to defeat THIS guy? https://t.co/QsCwihXAB6

Your boss apparently thought so. https://t.co/yje099pkPU

Kellyanne also tweeted another video of Biden writing, “This video is everything. The amateur armchair psychiatrists ought to take a crack at Creepy Joe.”

This video is everything.

The amateur armchair psychiatrists ought to take a crack at Creepy Joe. https://t.co/kdGJXYARh1

Twitterverse instantly responded to George Conway dunking on his wife. Here are a few responses:

Kellyanne is a counselor to the most powerful man in the world & the first woman to run a winning presidential campaign.

She’s successful & an excellent role model to women who want to work in politics.

The only reason people give you the time of day is bc you’re her husband.

I have a sleeper couch, George. Dogs are welcome, too.

you don’t have her phone number?

you have such a weird marriage

Are you serious right now? You have children together! Stop.

How shitty does your marriage have to be to publicly dunk on & disrespect your wife? This is pathetic.

you’re insecure and it shows. That’s your wife.