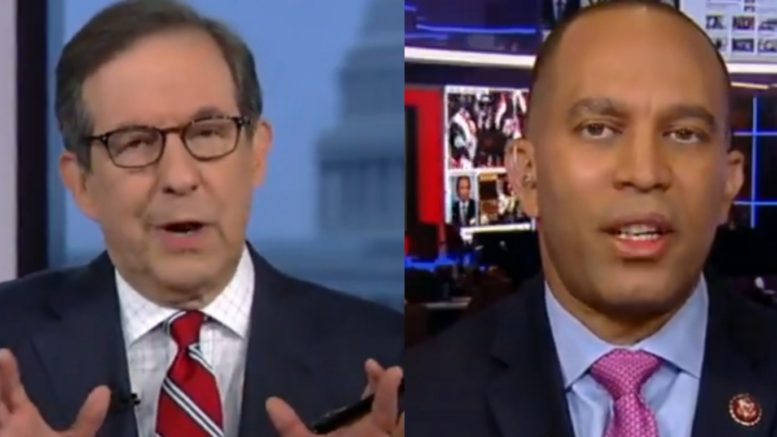 Congressman Hakeem Jeffries insists Democrats never really planned on impeaching President Trump, and rather came to Congress to “work with this President.”

Rep. Jeffries made the remarks while interviewing with Fox News host Chris Wallace on Sunday.

Wallace asked, “Wouldn’t Democrats have a stronger case against the President if you hadn’t been talking about impeaching him from the day he took office?”

Jeffries replied by saying that he disagrees “with that premise” as it relates to the current impeachment inquiry that is taking place.

“We are here reluctantly,” Jeffries proclaimed. “The impeachment of a president is not something that we came to Congress to do.”

“We came to Congress to get things done,” he continued, “to work with this President to drive down the cost of life-saving prescription drugs, and we hope to be able to pass a bill in the House over the next three weeks that would do that.” Video Below

Jeffries then claimed that Democrats have said that they want to work with President Trump to fix “crumbling bridges, roads, tunnels airports” and to “work with him on the renegotiated NAFTA agreement.”

Chris Wallace interrupted and said, “Excuse me congressman, but, I mean, the fact is almost since he took office. First, it was collusion with the Russians. The Mueller report said it couldn’t make a case there. Obstruction, which Democrats still believe…now Ukraine.”

Congressman Hakeem Jeffries, member of the House Judiciary committee to talk impeachment. Chris asks Jeffries if the Democrats would have a better case for against the president if they didn't talk about impeaching him since he took office. #FNS #FoxNews #Impeachment #Politics pic.twitter.com/PLJyfqaUzJ

Sen. Graham: ‘The Only Way This Ends… Is for Somebody in Russia to Take This Guy Out’