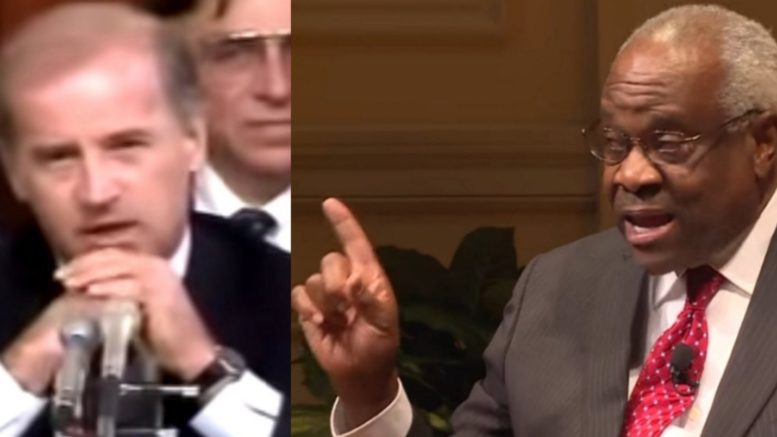 According to ABC News, a documentary titled, “Created Equal: Clarence Thomas in His Own Words,” is set to be released in theaters early next year, in which Justice Clarence Thomas opens up about how he felt and was treated during his confirmation process in 1991.

Justice Clarence Thomas is issuing a strong condemnation of the handling of his Supreme Court confirmation hearings, which were overseen by then-Sen. Joe Biden (D-Del.), saying they were designed to “get rid of me” because he was viewed as the “wrong” African-American for the position, as reported by The Hill.

“But it turned out that through all of that, ultimately the biggest impediment was the modern-day liberal,” he added. “They were the ones who would discount all those things because they have one issue or because they have the power to caricature you.”

Biden, at the time, chaired the Senate Judiciary Committee. The former vice president has faced renewed scrutiny over how he treated Anita Hill, the woman who came forward with accusations of sexual harassment against Thomas. Hill had testified before the committee that Thomas made unwanted sexual advances towards her, but he fiercely denies it.

“Do I have like stupid written on the back of my shirt? I mean come on. We know what this is all about,” Justice Thomas expressed about the confirmation process. “People should just tell the truth: ‘This is the wrong black guy; he has to be destroyed.’ Just say it. Then now we’re at least honest with each other.” (Continued Below)

Justice Thomas argued that “the idea was to get rid of me,” adding, “And then after I was there, it was to undermine me.”

Bill Russo, Biden’s deputy communications director, said in a statement to ABC News that it was no surprise that Justice Thomas does not have a positive view of him. “Then-Senator Biden voted against Clarence Thomas in the Senate Judiciary Committee, he argued against him on the Senate floor, and he voted against his confirmation to a lifetime seat on the Supreme Court,” Russo said, as per The Hill. (Continued Below)

Thomas was confirmed to the Supreme Court in October 1991 following a 52-48 vote in the upper chamber.

In a trailer for the film, Thomas objects to the “different sets” of standards to which he claims conservative African Americans are held. “There’s different sets of rules for different people. If you criticize a black person who’s more liberal, you’re a racist,” he said. “Whereas you can do whatever to me, or to now Ben Carson, and that’s fine because you’re not really black because you’re not doing what we expect black people to do,” per The Hill.