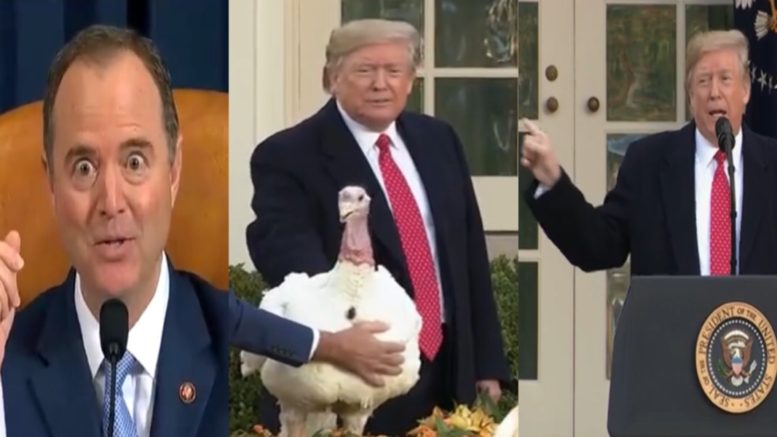 Ahead of Thanksgiving, President Trump and First Lady Melania Trump participated in the presentation of the National Thanksgiving Turkeys in the White House Rose Garden.

The President pardoned two Thanksgiving turkeys on Tuesday, acquitting “Bread and Butter” while injecting some impeachment humor into the Democrats’ continued efforts against the Commander in Chief.

“Thankfully, Bread and Butter have been specially raised … to remain calm under any condition, which will be very important, because they’ve already received subpoenas to appear in Adam Schiff’s basement on Thursday. It’s True. Hundreds of people have,” the President joked while possibly ruffling some feathers.

“It seems the Democrats are accusing me of being too soft on turkey, but Bread and Butter, I should note that unlike previous witnesses, you and I have actually met. It’s very unusual. Very unusual,” President Trump continued.

“In any event, I expect this pardon will be a very popular one with the media. After all, turkeys are closely related to vultures. I don’t know if I like that line, but there is a little truth to it,” he added.

After Bread and Butter’s presidential pardons, the turkeys will retire to Gobbler’s Rest at Virginia Tech. (Continued Below)

“They will be cared for and enjoy a terrific life,” the Commander in Chief said of the pair of turkeys.

“This Thanksgiving, we bow our heads in gratitude for the newfound prosperity and spirit that’s taking place all across America. The country has never been more successful,” he expressed. (Video Below)

TRUMP: "[The turkeys] have already received subpoenas to appear in Adam Schiff's basement on Thursday… I should note that unlike previous witnesses, [the turkeys] and I have actually met."