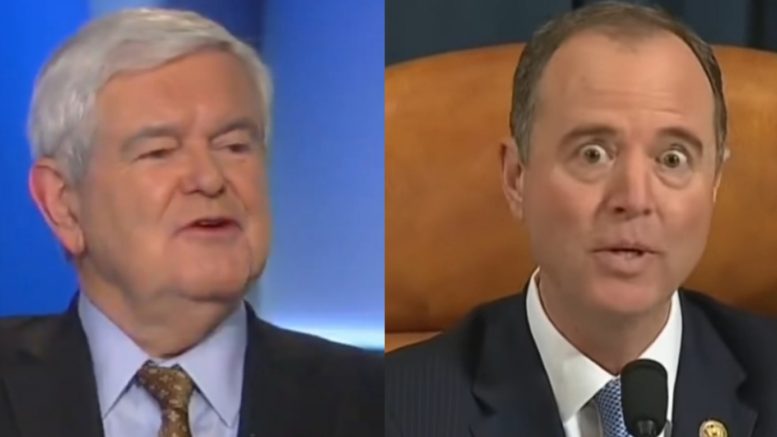 Former House Speaker Newt Gingrich had some choice words for House Intel Chairman Adam Schiff and how he handled every attempt by House Republicans to discuss the alleged whistleblower during the public impeachment hearings.

Schiff shut down Nunes while questioning Colonel Alexander Vindman on who he told outside of the White House about the phone conversation involving President Trump and Ukrainian President Zelensky.

“The whistleblower has right, the statutory right to anonymity, these proceedings will not be used to out the whistleblower,” Schiff said in his interruption.

“Schiff’s a liar,” Newt Gingrich said while appearing on Fox News. “If Schiff doesn’t know who the whistleblower is, why is he cutting off questions about a person he doesn’t know exists?” he questioned. Video Below

“It’s hard to exaggerate for the American people the degree to which Adam Schiff is a liar,” Newt declared. And a liar on a scale that, frankly, totally dishonors the U.S. Congress.”

“There’s no whistleblower statute for what happened,” he added. “What you have is a leaker. The leaker was leaking things that were classified. He has no right to protection.”

“Schiff clearly knows who he is and has lied tp the country,” he concluded. Video Below

It's hard to exaggerate how fundamentally dishonest Adam Schiff has been throughout this impeachment process. It's on a scale that dishonors the United States Congress. pic.twitter.com/0VbZnnKTnN