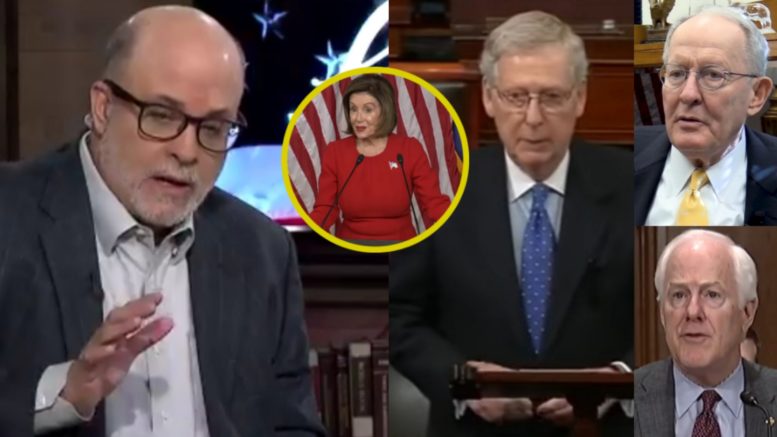 In one of his recent programs on Blaze TV, Mark Levin warned GOP Senators that it is time to “stand up” to House Speaker Nancy Pelosi and the rest of the “radical, hard left, quasi-Marxist party.”

His remarks come as Democrats, at the lead of Speaker Pelosi and Adam Schiff, have been pushing hard to convince Americans that President Trump committed bribery as part of their impeachment efforts.

“Jim Jordan does. Scalise does [know how to deal with this]” he continued. “And, more and more Kevin McCarthy does. I mean, give credit where credit is due.”

“You see no pushback from the United States Senate when they should be fighting now before it reaches a ‘trial level’,” Levin proclaimed. “And you see them duking it out in the House of Representatives, and the Republicans doing everything they can.” Video Below

Levin went on to say that although House Republicans are doing everything they can, it’s tough to get their way because they’re “under fascistic rule under Nancy Pelosi.”

And that poison, if they have their way, will spread throughout the country,” Levin said in conclusion. Video Below

Stop The Flow Of Poison