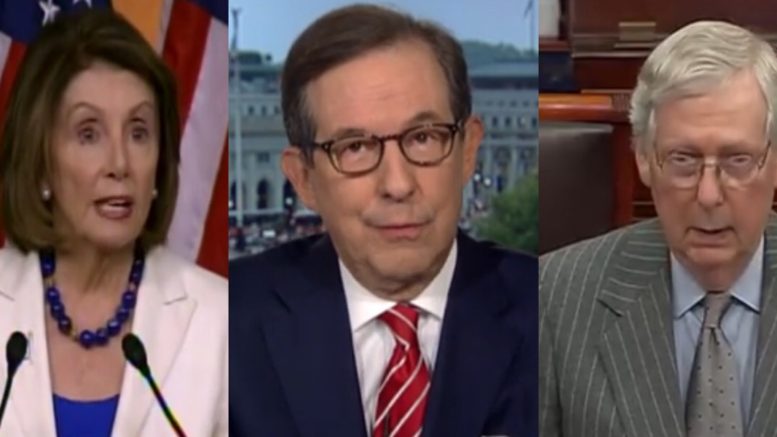 Thursday, while the House Intelligence Committee took a recess from the Democratic-led impeachment inquiry against President Trump, to participate in a vote series on the House floor, Fox News host Chris Wallace suggested that Congress and the Senate should compromise on “censuring” President Trump, instead of impeaching him.

“[They] should go instead for censure of the President,” Wallace said. “Nancy Pelosi in the last hour had a press conference and was asked what she thought what the impeachment hearings had found so far, to which she claimed, ‘When we see a violation of the Constitution, we have no choice but to act.'”

House Speaker Nancy Pelosi (D-CA) claimed on Thursday, without substantial evidence, the President’s apparent charge: “The President has used his office for his own personal gain. And in doing so, it undermines the national security of the United States by withholding military assistance to the Ukraine, to the ‘benefit of the Russians.'”

Wallace explained Pelosi’s assertions against the President on “violations of the Constitution, the President using his office for personal gain, and undermining national security”, with the claims made by House Intelligence Adam Schiff (D-CA) in the public hearings, that Democrats won’t stand down.

“[Adam Schiff] makes long statements at the end of each hearing, in which he paints the President’s actions in the worst and starkest possible terms. So the idea that Democrats would ‘stand-down’ and decide they weren’t gonna go for impeachment, but instead, might go for something smaller like ‘censure’, strikes me as maybe wishful thinking on the part of some Republicans,” Wallace said.

“I base this on nothing, no facts. But it seems to me that rather than putting the whole country through impeachment, where it seems likely on a largely partisan vote, the Democrats are gonna vote to impeach the President. And then, the Republicans in the Senate are ‘not’ going to vote to convict him and remove him, he’ll rather be acquitted,” Wallace explained. (Continued Below)

“The idea of censure is kind of a plea bargain, where both sides agree, House and Senate, Republican majority in the Senate, Democrat majority in the House– we’re gonna censure the President, we’re all gonna agree to do that, and we’re gonna move on, seems like a reasonable compromise and a way out of all of this,” he continued.

“Now, you’d say why would the President and the White House ever agree to that? And probably they won’t, but I think the President has made it clear that he really does not want to go down in history as the third President, in the history of this country, to be impeached– with Andrew Johnson and rather, Bill Clinton. And so, censure might be a midway point that everybody can get out of this. I’m just offering it, and I’m not asking any legal fee for my suggestion,” Wallace added.

The President tweeted on Thursday, “I never in my wildest dreams thought my name would in any way be associated with the ugly word, Impeachment! The calls (Transcripts) were PERFECT, there was NOTHING said that was wrong. No pressure on Ukraine. Great corruption & dishonesty by Schiff on the other side!” (Video Below)

President Trump also quoted Ken Starr, Former Independent Counsel in a tweet on Thursday: “Does this reach the level of treason, bribery or other high crimes and misdemeanors? My assessment of the evidence so far, NO WHERE CLOSE.”

“The evidence is conflicting & ambiguous. Ambassador Sondland’s testimony stated that President Trump said the Ukraine President should just do the right thing (No Quid Pro Quo). You shouldn’t charge, but you cannot convict, a sitting president on the basis of conflicting and ambiguous evidence, and destabilize the American Government. Thank you Ken!” the President wrote.

(Related: Levin Warns GOP Senators To “Stand Up” & Stop Pelosi’s “Poison” From Spreading Around The Country)

Ben Carson Reacts To Accusations That Trump Is Racist: ‘I’ve Never Seen Any Of That, Whatsoever’