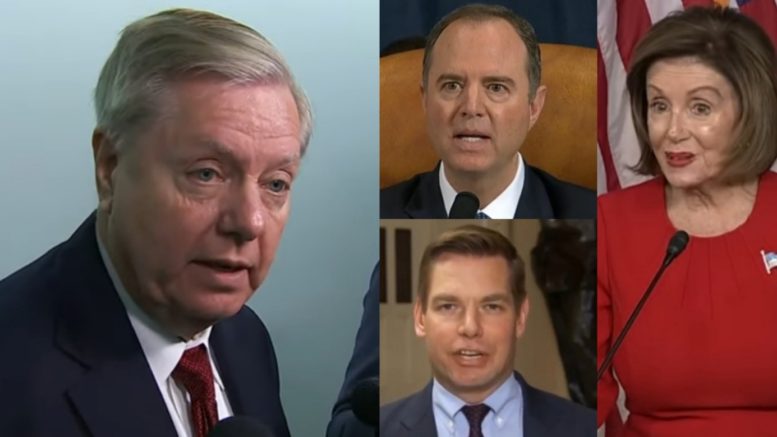 Democrats initially accused President Trump of being involved in a “quid pro quo,”, which was grounds for which they opened up an impeachment inquiry.

However, as more facts to the case surfaced, the “quid pro quo” narrative fell apart, leading Democrats to use results of a poll to shift the offense that they allege Trump committed to “bribery.”

In dramatic fashion, Ratcliffe pointed out that no witness in the countless of hours of closed-door depositions ever mentioned concern that President Trump was involved with bribery.

While the hearing was fully underway, Senator Lindsey Graham weighed in on Democrats “bribery” allegation against President Trump in a post on Twitter. Video Below

“So now it’s “Bribery,” Senator Graham said in a tweet.

“Who did the president “Bribe” and what did he get for it?” he asked. “Be specific.”

“The truth is that “Bribery” is a made-up, poll tested charge without any factual basis in this case,” Sen. Graham declared. Video Below

Senator Graham, along with his fellow Republican colleagues, have had many issues with the way Democrats have handled the impeachment process.

In an earlier statement, Graham suggested that if the Democrats are successful pushing impeachment through to the Senate, it will be “dead on arrival” if it is based on no facts and only hearsay, which so far appears to be the case.

We leave you with video of Graham making a statement to the press on Tuesday in reaction to Democrats’ bribery charge: