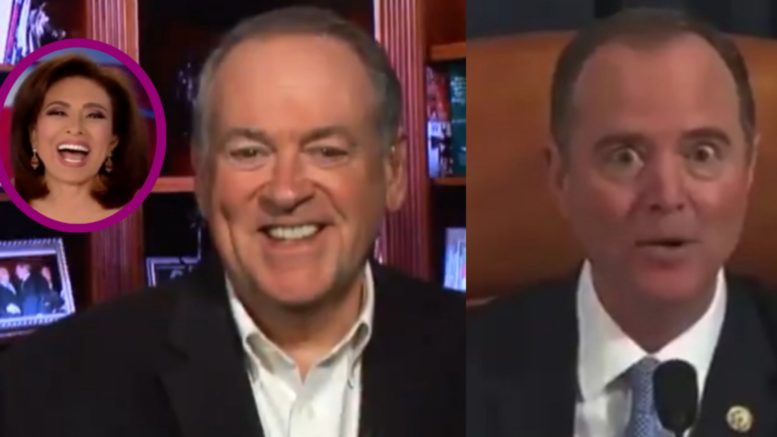 Former Arkansas Governor Mike Huckabee made one of the most unique comparisons yet when weighing in on efforts led by Democrats to impeach President Trump.

As the first public impeachment hearings took place last week, Democrats shifted their accusation that President Trump was involved in a “quid pro quo” to now saying that he committed “bribery,” after reportedly conducting focus groups to determine which term to use. In regards to Dems latest move, Judge Jeanine asked Huckabee, “Are they stupid?”

“Uh, yea. Everybody in America who honestly thinks this is anything other than a political game for the Democats…they gotta be stupid,” Huckabee replied. “I have to believe that there are just a lot of Democrats and Independents across the country who are smarter than the Democrats in Washington must think they are.”

“People just aren’t this stupid,” he added. “There are a few people who really are, but most people can look at this on the surface and realize this is like a Marvin Gaye song, ‘I Heard It Through The Grapevine.'”

“Nobody has first hand information and the people who do — who actually read the transcript or who were on the call — admit there was nothing wrong with President Trump’s phone call, Huckabee declared. “Nor was there anything wrong with him firing ambassadors.”

Huckabee went on to say that “everybody forgets” that a month and a half before taking office, former President Obama sent a letter to all ambassadors, saying they are fired and need to be out of their offices by the time he officially became President in January.

“Nobody said a peep, nor did I,” he said. “I’m a Republican, but why didn’t I complain or fuss? Because he has every right to do that. Elections have consequences.” Video Below

.@GovMikeHuckabee talks about the Democrats' switch from the use of "quid pro quo" to "bribery." Check out my interview: pic.twitter.com/fUhZaI678B

In ending, here’s a video in memory of Marvin Gaye’s “I Heard It Through The Grapevine” that Huckabee referenced: