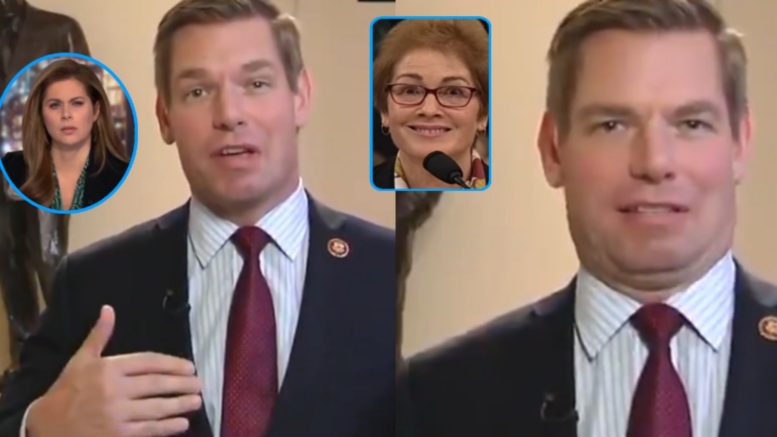 After Friday’s public impeachment hearing, Democrat Congressman Eric Swalwell suggested that he would consider using a tweet from President Trump in official articles of impeachment if they were to be drawn up.

The idea was brought up as Swalwell interviewed with CNN’s Erin Burnett, and while the pair discussed a tweet that President Trump posted during Yovanovitch’s testimony. Democrats
have since accused President Trump of “witness intimidation” as a result of the tweet.

“Everywhere Marie Yovanovitch went turned bad. She started off in Somalia, how did that go? Then fast forward to Ukraine, where the new Ukrainian President spoke unfavorably about her in my second phone call with him. It is a U.S. President’s absolute right to appoint ambassadors. They call it ‘serving at the pleasure of the President,'” Trump said in a tweet.

“The U.S. now has a very strong and powerful foreign policy, much different than proceeding administrations. It is called, quite simply, America First! With all of that, however, I have done FAR more for Ukraine than O,” he added.

In reaction to Trump’s tweet that CNN’s Burnett labeled as an “attack,” Swalwell said, “It didn’t work. Ambassador Yovanovitch proved herself to be fearless, committed and a tough, tough anti-corruption diplomat working on all of our behalfs, but the President smeared her…when she was in Ukraine, smeared her in that July 25 phone call and even smeared her while she was testifying.”

“We view that as witness intimidation intended to chill her testimony and chill the testimony of others,” he continued. “This is what guilty people do, and it didn’t shake this ambassador.” Video Below

Burnett then asked Swalwell, “Is this something you would…consider adding as a formal article of impeachment — this intimidation as you see it — or is it just a point that you’re making?”

“Possibly,” Swalwell replied. “But, Erin, our primary focus is the use of tax payer dollars to have Ukrainians investigate the President’s political opponent.”

“Here, the underlying crime is very, very big — very offensive to our values — but yes, of course intimidating the witness is obstruction of justice and there’s strong evidence that occurred today,” he concluded. Video Below

"It didn't work," says @RepSwalwell of President Trump's attempts to intimidate Marie Yovanovitch.
She "proved herself to be fearless, committed and a tough, tough anti-corruption diplomat working on all of our behalfs."https://t.co/LIEQ8YEl7E pic.twitter.com/DHPLtL93RV

On the flipside to Swalwell’s story of President Trump’s tweet, Republicans slammed Chairman Adam Schiff after the hearing, accusing him of only reading half of the President’s tweet to Ambassador Yovanovitch before asking for her response.

In the post hearing press conference, Republican Congressman Lee Zeldin argued that Schiff was trying to hide the full tweet from Yovanovitch just like how he is either hiding or “cherry picking” information to support the impeachment narrative.

We leave you with video that includes Zeldin’s remarks related to Trump’s tweet:

Sen. Graham Turns The Tables On Dems Who Are Suggesting GOP Senators Are “Blocking Witnesses”