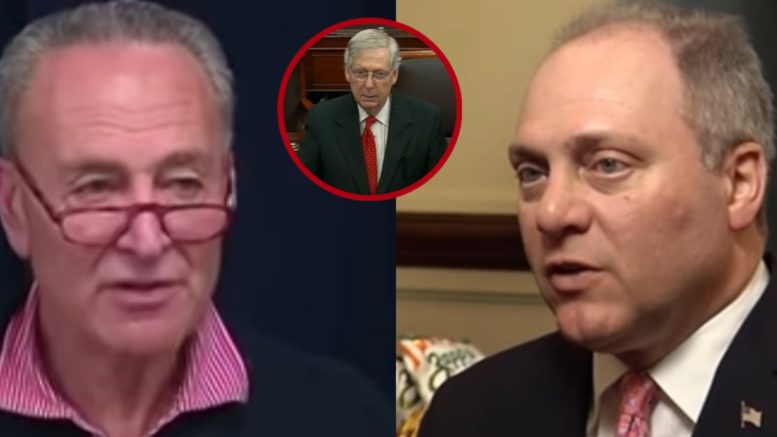 On Sunday, Senator Chuck Schumer called on Senate Majority Leader Mitch McConnell to “consult” with him and other Democrats if and when impeachment rules are formed.

Schumer also signaled that he is ready to sit down with McConnell to come up with “fair” and “bipartisan” rules for impeachment.

In a video of a speech posted by The Hill, Schumer said, “McConnell is the majority leader, so it is his prerogative to set up rules.”

“In the past, there has always been consultation with the minority leader,” he continued. “And, I hope he will consult with us so we can get some fair bipartisan rules like was done in the last impeachment situation with Bill Clinton.”

“I’m ready to sit down with leader McConnell and try to come up with fair rules,” Schumer said. “There’s no reason why we shouldn’t be able to do that.”

House Minority Whip Steve Scalise retweeted the video of Schumer making the remarks and captioned it “Tell that to Speaker Pelosi.” Video Below

Tell that to Speaker Pelosi. https://t.co/ULyZjb7VeG

House Republicans, including Scalise, have been frustrated by the way Democrats have conducted their “impeachment inquiry,” that they say has gone against the methods used in the past.

Scalise has labeled Democrat-led impeachement efforts as an “unfair” and “Soviet-style” process, citing things like closed door hearings and Adam Schiff directing a witness not to answer Republican questions.

On top of that, it appears Republicans will not get to call all of their witnesses in public hearings as Schiff has signaled Democrats will deny majority of the GOP’s proposed witness list.

In ending, here are recent remarks Scalise made on Twitter regarding the “impeachment charade.”

The Dems’ impeachment charade is pre-baked.

They’re not interested in actually hearing the facts. They’ve already made up their minds and just want a show.

After all, these are the same people who launched the inquiry before seeing the transcript.

Take their word for it ↓ pic.twitter.com/l4R4b2kPVm

Former Acting AG Whitaker on Merrick Garland Appointing a Special Counsel: ‘Probably the Most Partisan Move He Has Made to Date’