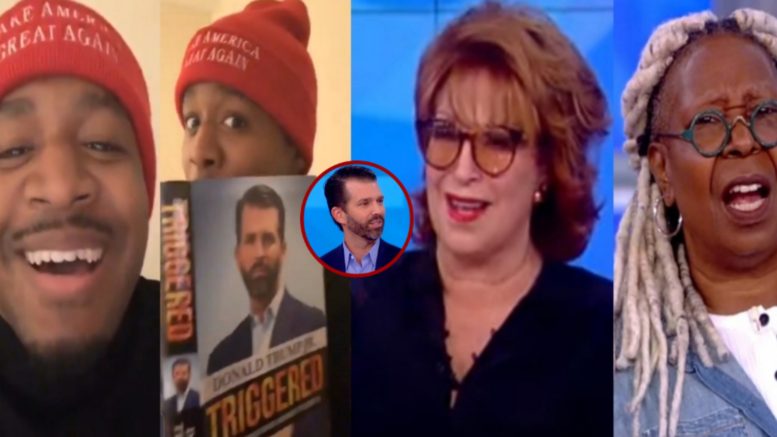 Conservative comedian Terrence Williams weighed in on the viral, heated exchange between Donald Trump Jr. and co-hosts of The View, Whoopi Goodberg and Joy Behar.

Don Jr. was on the program to discuss his new book, “Triggered: How the Left Thrives on Hate and Wants to Silence Us, when he was bombarded by Behar, who pointed out flaws in the character of his father President Trump.

“We’ve all done things that we regret. I mean if you’re talking about bringing a discourse down,” Donald Trump Jr. said in his reply to Behar. “Joy, you have worn ‘blackface’. Whoopi, you’ve said that Roman Polanski… it wasn’t ‘rape-rape,’ when he raped a child.’ So, let’s talk about serious things.

Behar claimed she did not wear “blackface” and Whoopi tried to defend her co-host. “No, she was not in blackface. Listen, being black, I recognize blackface, this I can say,” Whoopi said.

After seeing the exchange, Terrence Williams uploaded a selfie video where he gave his two cents on the matter after he let a clip of the full exchange play out. He also had a picture on the bottom right that showed a picture of what Don Jr. was referring to, which appears to be a darkened version of Joy Behar. Video Below

“So ya’ll thought this man was gonna come on this show and not defend his daddy?” Terrence questioned after laughing hysterically. “That’s not only his daddy — Donald J. Trump is the President of the United States of America, so of course Junior is gonna stand up for his daddy and his President, okay?”

“And you know what, he was right, Joy. You had on a blackface. Yes, you did,” he added.

“I can’t believe you Whoopi, talking about ‘I’m black, I know what a blackface look like.’ I’m black too, Whoopi, and that was a blackface that she had on,” Terrence concluded. Video Below

#TheView COULDN’T HANDLE THESE TWO. THEY WERE TRIGGERED @DonaldJTrumpJr & @kimguilfoyle went into the lions den & they demolished THE VIEW!

RT if you’re laughing with me! pic.twitter.com/b7OXYEuMLE