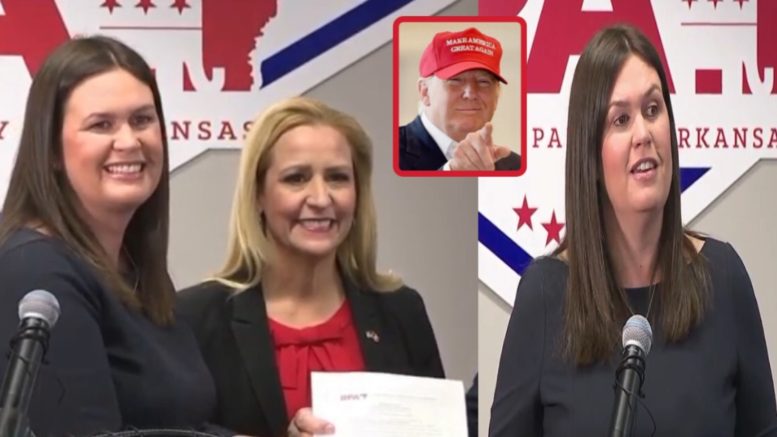 As of Friday morning, President Trump will officially appear on Arkansas ballots for the 2020 election, according to KATV.

After leaving the Trump administration, Sarah Sanders is still giving the President her full support on the campaign trail.

“It has just been so nice and so refreshing to be back home and such an honor to get to be in Arkansas to file on behalf of the President that I had the opportunity and the privilege to work for over the last two and a half years,” Sanders told the press.

“I think the President has a great temperament, and I think that’s why he has been so successful,” the former press secretary said.

“Some politicians, some people running for office, some people seeking re-election even, are all talk, but this President is all walk,” Attorney General Leslie Rutledge Rutledge expressed. (Continued Below)

When asked about possible runs at Arkansas governor in 2022, Sanders explained, “I think we have a tremendous 2020 ahead of us, and that’s our focus. Let’s not forget our current governor just got re-elected about 15 minutes ago, let’s let him be governor.”

When it comes to whether or not President Trump will make a stop in Arkansas on the campaign trail, both Rutledge and Sanders say that’s still up in the air, as reported by KATV.

“Even if the president doesn’t come to Arkansas, I still think he’ll win by 20 or 30 points. So, he doesn’t have to because this is a state that’s going to vote for Donald Trump, but we’d love to have him. We’d love to welcome him here, and I know if he came it would be a rock-star-like reception,” said Sanders. (Video Below)

Sanders and Rutledge will both be on President Trump’s campaign as honorary state chairs in Arkansas, per KATV.

Sanders also tweeted, “Proud to file the paperwork for [President Donald Trump] to be on the ballot in my home state of Arkansas. #MAGA #KAG #TrumpPence2020”.

Proud to file the paperwork for @realDonaldTrump to be on the ballot in my home state of Arkansas. #MAGA #KAG #TrumpPence2020 https://t.co/DiucW8gVhp

(Related: Sarah Sanders Reacts After Trump Appoints Her To Fulbright Foreign Scholars Board: ‘Grateful To Trump’)