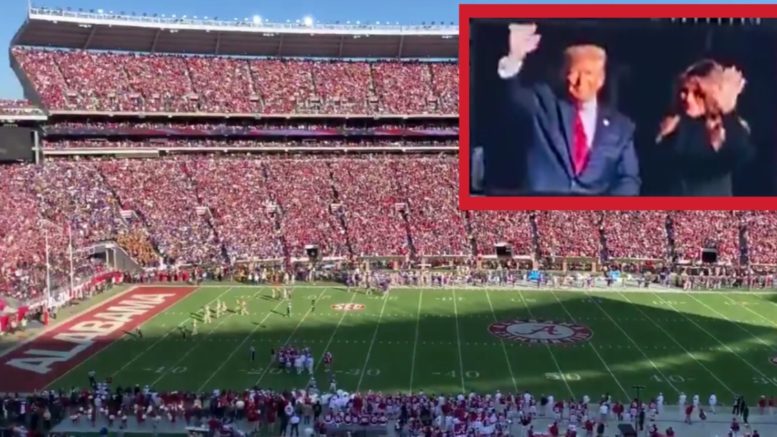 During the first timeout of the game, the President and First Lady received a loud ovation from the fans in the Bryant-Denny Stadium.

President Trump and First Lady Melania could be seen on the big screens where they were smiling and waving to the fans in the audience.

Shortly after Bama fumbled in the red zone and LSU scored, the crowd went wild and cheered as the President and First Lady greeted the thousands of fans while waving.

The Commander in Chief could be seen on the football screen clapping, waving, and grinning from ear to ear as the stadium roared with warm cheers and applause.

President Trump tweeted pictures from the game and expressed, “Thank you to LSU and Alabama for a great game!”

Here is another clip of the fans cheering:

President @realDonaldTrump gets a loud ovation from the fans in Bryant-Denny Stadium during the first timeout of the LSU/Alabama game.@wdsu pic.twitter.com/IgHWvFTyAU

And some fans excited about the President’s visit:

Honored to watch “the game of the year” alongside President @realDonaldTrump! #LSUvsBAMA pic.twitter.com/aESkgm7YlW

Donald Trump Jr. noted, “I’m sure this will get a lot of media coverage…”

I’m sure this will get a lot of media coverage… https://t.co/ktsyJ0B19f