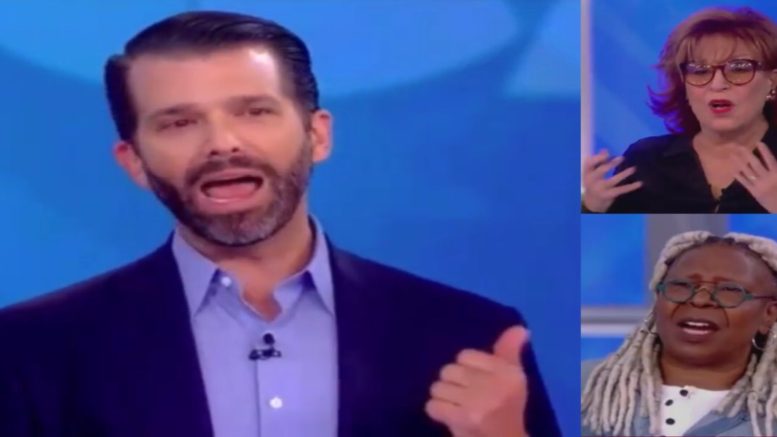 Donald Trump Jr. and his girlfriend Kimberly Guilfoyle stepped into the lion’s den Thursday as they appeared on ABC’s “The View” to discuss his new book, “Triggered: How the Left Thrives on Hate and Wants to Silence Us.”

During the episode, however, Don Jr. blasted hosts Joy Behar’s past use of “blackface” and Whoopi Goldberg’s comments of diminishing the seriousness of director Roman Polanski’s sexual assault of a minor.

“We’ve all done things that we regret. I mean if you’re talking about bringing a discourse down,” Donald Trump Jr. said. “Joy, you have worn ‘blackface’. Whoopi, you’ve said that Roman Polanski… it wasn’t ‘rape-rape,’ when he raped a child.’ So, let’s talk about serious things.

Behar claimed she did not wear “blackface” and Whoopi tried to defend her co-host. “No, she was not in blackface. Listen, being black, I recognize blackface, this I can say,” Whoopi said.

“Now that you’ve broken this piece of ice, because I guess it is the fight you wanted, … Are you questioning my character?” Whoopi asked.

“I’m not questioning your character. I’m talking about… you’re questioning my father’s character and I say we all have done and said things…” Don Jr. countered before being interrupted by Whoopi. (Continued Below)

While Behar denied wearing blackface, Trump Jr. tweeted a 2016 clip that shows Behar admitting that she wore blackface and a picture of her costume.

“I don’t think I’ve enjoyed an interview this much in my life. Guess you could say that I just #Triggered The View!!!” Trump Jr. also wrote on Twitter.

He also tweeted a link to an article about Whoopi’s comments where she defended Hollywood pedophile Roman Polanski, claiming what he did wasn’t “rape-rape.” (Video Below)

Donald Trump Jr. fires back at Behar and Whoopi:

I don't think I've enjoyed an interview this much in my life.

Guess you could say that I just #Triggered The View!!! https://t.co/K0zMTij3Pw

Trump Jr. posted the video of Behar admitting she dressed as a “beautiful African woman”:

Here's @TheView's Joy Behar admitting on national TV that she in fact wore blackface. Why are they denying it now? https://t.co/B9ReOYrwXY

(Related: On Live TV, Don Jr. Singles Out Mitt Romney When Asked Who His Favorite Democrat Is)