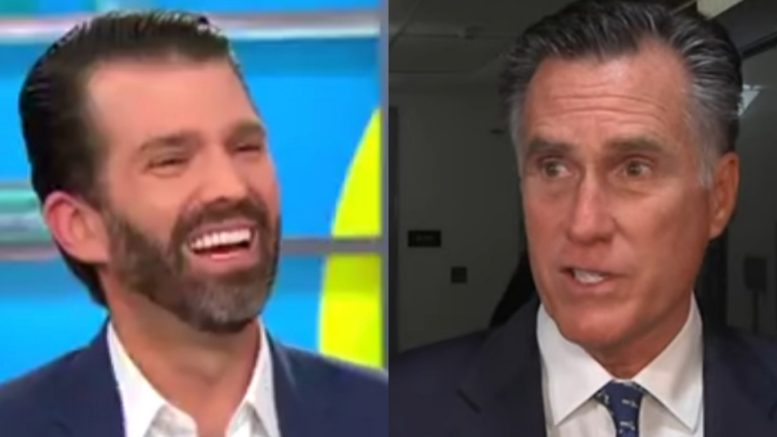 Donald Trump Jr. called out Senator Mitt Romney on Tuesday when asked who his favorite Democrat is.

Hosts from CBS This Morning brought Don Jr. on their program to discuss his book “Triggered: How The Left Thrives On Hate And Wants To Silence” when he briefly made remarks about Romney, who often criticizes President Trump.

During the interview, Don Jr. defended his father, President Trump, and touted his accomplishments despite being constantly attacked by forces from the left.

Related Article: Schumer Says Trump “Can’t Make It” In New York, Don Jr. Levels Him With One Burning Question: “Can Anyone Name One Thing He Has Done For NY?”

In regards to impeachment, Don Jr. believes the process will “vindicate” the President and will hurt “people in the middle.”

He also voiced his concern that there are various government officials on both sides of the aisle who are constantly working against his father as they’re “looking for their next gig.” Video Below

“I think the DC establishment and the swamp — they realize that after Trump, it may go back to normal and they’re protecting themselves on both sides,” Don Jr. proclaimed.

Towards the end of the interview, Gayle King asked, “Who is your favorite Democrat?”

Don Jr. paused briefly and replied, “Mitt Romney is my favorite Democrat. How about that?” Video Below

When asked by @GayleKing who his favorite Democrat is, @DonaldJTrumpJr paused and then responded by saying:

"Mitt Romney is my favorite Democrat. How about that?"https://t.co/Bg0eCI3vlZ pic.twitter.com/O9LWstvJJ3