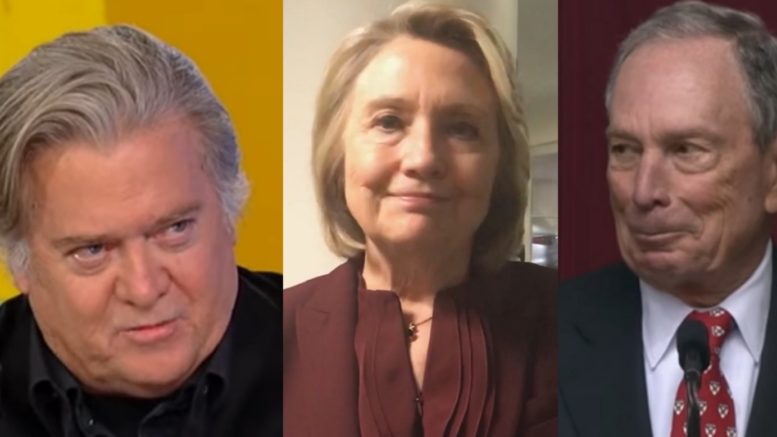 While being interviewed by Maria Bartiromo on Sunday, former White House Chief Strategist Steve Bannon gave his thoughts on the status of the Democrat Presidential hopefuls in the race for 2020.

Bannon made it clear that he is unimpressed by nearly all Democrat candidates. And he thinks they are so bad, that there’s a strong possibility up to two more candidates could be joining the lineup before the Iowa Caucus in February.

Mr. Bannon said that Biden has become “uninspired,” Mayor Buttigieg hasn’t been getting the “Obama moment” he’s been looking for, and Warren’s policies are too radical for the “centrists” of the Democratic Party.

“I just don’t believe that centrists — that particularly the Wall Street crowd and the Democratic Party — are gonna sit there and have a coronation for Elizabeth Warren,” Bannon said.

“So I think that Bloomberg and Clinton are still there,” he proclaimed. “As Biden is fourth in Iowa. He’s second in New Hampshire, I think dropping to third. He’s losing steam everywhere.”

Bartiromo clarified: “You think Michael Bloomberg or Hillary Clinton will enter this race?” Video Below

“I think that they are the best two representatives of — what goes for today — the centrists of the Democratic Party,” Bannon responded.

He followed up by suggesting centrists of the party will let the process play out for now, since they don’t want to seem like they’re “disrupters” or “elbowing Biden out of the way.” But some time right before or right after Iowa, if they don’t like the way the race is heading as the “gravity falls out”, they will hold a vote and nominate either Hillary or Bloomberg to run.