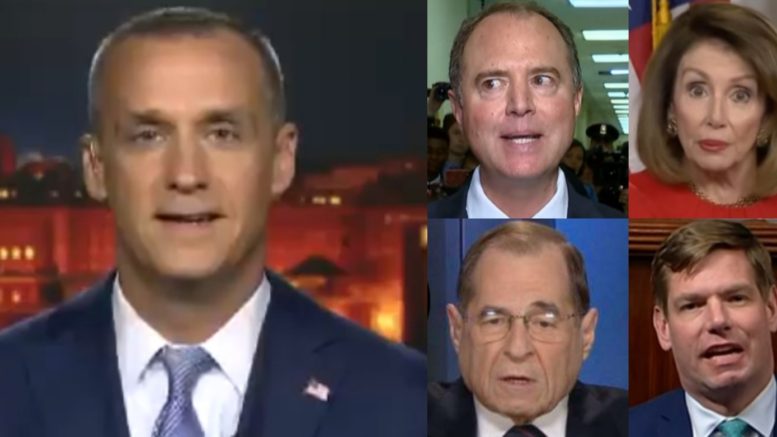 While appearing on Judge Jeanine’s Saturday night program, Cory Lewandowski weighed in on Democrats’ impeachment effort and explained how it will ultimately help President Trump and Republicans in the 2020 election.

Lewandowski began by bringing up how 31 Democrat representatives will be in a world of hurt in 2020 election, since they represent districts where President Trump had high support from his base in the 2016 election.

The move to impeach President Trump, Lewandowski claims, is a result of forces from the radical left that Democrats are trying to appease, which will ruin it for Dems in districts filled with heavy support for Trump.

Lewandowski challenged “President Swalwell and his pack of merry men” to hold hearings in public, allow the President to defend himself, give Republicans full subpoena power, and have full transparency. But he claims they won’t, despite their recently passed resolution, because “they know they’ll lose.”

“Little Adam Full Of Schiff has told witnesses he doesn’t have to answer questions from the Republicans. Can you imagine if a Republican committee chairman said that when the Democrats were in the minority? It would be front page news and they would be calling for that person to be thrown out of Congress,” Lewandowski declared. Video Below

“There’s the Progressives who are challenging them from the left — are pushing them to do this,” he added. “It will be at their own detriment.”

“It’s going to force the American people to see that the Democrats have failed them once again. It’s going to help Donald Trump at the ballot box in 2020,” he concluded. Video Below

"Little Adam full of schiff told witnesses he doesn't have to answer questions from Republicans. Can you imagine if a Republican committee chairman said that if democrats were in the minority?" – @CLewandowski_ pic.twitter.com/o552nUMwnp