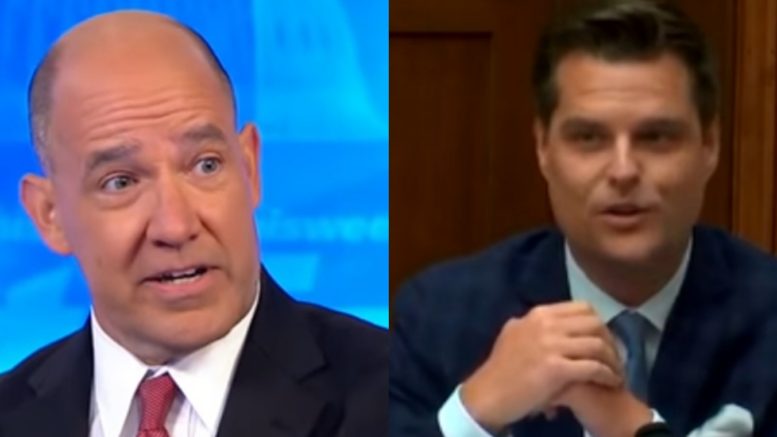 Congressman Matt Gaetz has shaped into quite the antagonist for Democrats and liberal mainstream sources who have been trying to drum up the impeachment effort against President Trump.

Gaetz led the effort to protest the secret impeachment inquiry by “storming” the SCIF where closed door hearings were taking place, and just recently, he filed an ethics complaint against Democrat impeachment ringleader Adam Schiff over House rules he claims have been broken throughout the investigative process.

And if that isn’t enough to cause a headache for Democrats, Gaetz along with other Republican members of the House Judiciary Committee also announced their plan to call Schiff in to testify in front of the committee as they claim he is a fact witness in the whistleblower case.

Gaetz’s latest moves must have gotten under the skin of ABC’s Chief Political Analyst Matthew Dowd who mocked the Congressman in a recent post on Twitter.

Dowd tweeted: “I just want to stick up for Rep. Matt Gaetz, he is definitely not a tool. Tools are useful.”

“I was overwhelmingly elected to Congress. Twice,” Gaetz said in a reply to Dowd. “I’ve served nearly a decade in public office, earning voter trust every 2 yrs.”

“You are appointed by corporate media 2 spread the very nonsense voters rejected when they elected Trump,” he added. “Your views are the definition of useless.” See Below

I was overwhelmingly elected to Congress. Twice. I’ve served nearly a decade in public office, earning voter trust every 2 yrs.

You are appointed by corporate media 2 spread the very nonsense voters rejected when they elected Trump.

Your views are the definition of useless. https://t.co/YVdVNzDDoy