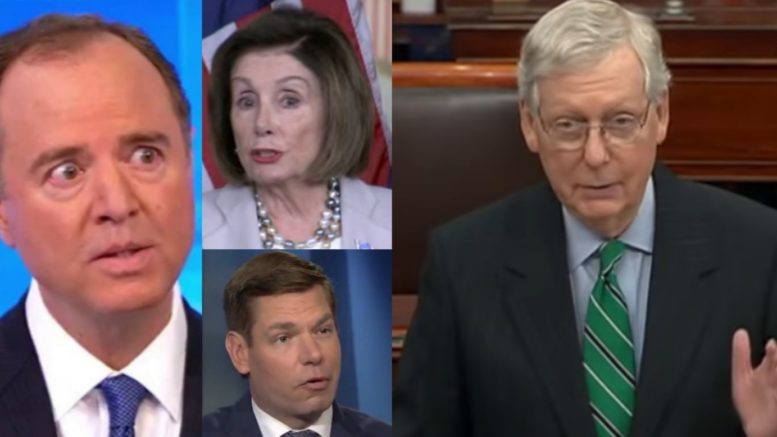 Senate Majority Leader Mitch McConnell has been highly critical of Democrats’ proposed “Impeachment Resolution” as they plan to hold a floor vote on it this Thursday.

In a press conference on Tuesday, McConnell was encouraged by the news that Democrats were introducing a resolution to possibly bring about fairness and due process in the impeachment process. But he was skeptical on whether or not it would pass “the smell test of providing the kind of due process protections the President and his team are certainly entitled to, just like President Nixon was and President Clinton was.”

After studying the full resolution, McConnell clearly did not like what Democrats proposed, and he now thinks the process that they laid out is completely “unfair.”

Speaking on the Senate floor on Tuesday, McConnell said the drafted resolution “falls way short” of bringing fairness and due process into the impeachment inquiry, despite it being hyped up as containing such measures.

“Any such inquiry must be conducted by the highest standards of fairness and due process,” McConnell said. “But thus far this time around, instead of setting a high bar, Democrats seem more determined to set a new low.”

Then just hours later on Twitter, Senator McConnell suggested the impeachment resolution does nothing but “codify” the “unfair process” that Democrats have been undergoing in their impeachment effort. Video Below

1. No due process now
2. Maybe some later
3. But only if they feel like it

No American, the president or anyone else, should be subjected to this kind of unfairness.” Video Below

In ending, here is part of McConnell’s Tuesday speech, where he slammed Democrats and their impeachment resolution:

Rep. Rutherford To Rep. Jayapal: “You & Your Squad Of Ayatollah Sympathizers Are Spreading Propaganda That Divides Our Nation”