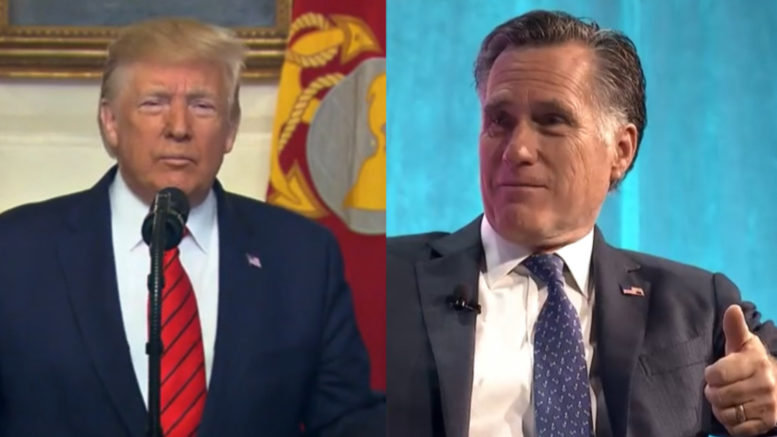 Despite criticism that Senator Mitt Romney (R-UT) has previously shown toward President Donald Trump, the Utah Senator stepped up to express his gratitude toward the Commander in Chief for Baghdadi’s death.

Sen. Romney took to Twitter on Sunday and wrote, “Al Baghdadi spread ‘fire and brimstone’ on earth; now he feels it for himself in hell.”

“To all who arranged his change of venue—the intel officers, the President, the warriors—thank you,” the Utah senator added.

Last week, Romney confirmed he a shadow Twitter account with the handle @qaws9876, and the name Pierre Delecto, to “keep tabs on the political conversation.” On Sunday, Romney thanked the President on Twitter using his account “Mitt Romney”. (Continued Below)

Al Baghdadi spread “fire and brimstone” on earth; now he feels it for himself in hell. To all who arranged his change of venue—the intel officers, the President, the warriors—thank you.

Dan Scavino, assistant to the President and social media director, tweeted a picture of the Commander in Chief, who was joined by VP Mike Pence, National Security Advisor Robert O’Brien, left; Secretary of Defense Mark Esper and Chairman of the Joint Chiefs of Staff U.S. Army General Mark A. Milley, and Brig. Gen. Marcus Evans, Deputy Director for Special Operations on the Joint Staff at right.

The picture was taken on Saturday, Oct. 26, 2019, in the Situation Room of the White House while monitoring developments as U.S. Special Operations forces closed in on notorious ISIS leader Abu Bakr al-Baghdadi’s compound in Syria with a mission to kill or capture the terrorist.