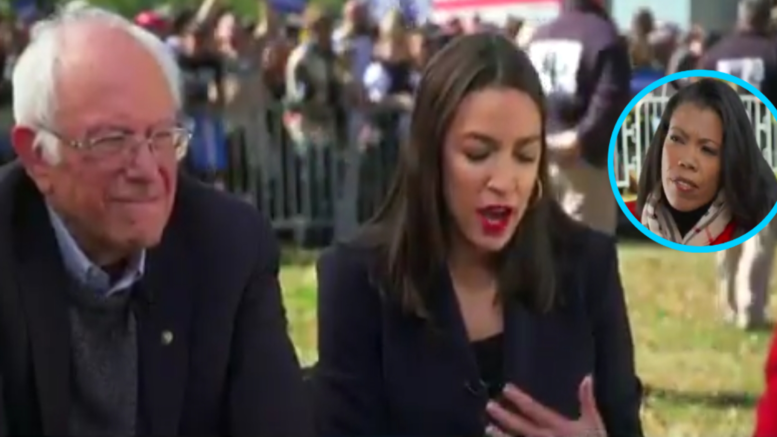 Over the weekend, Democrat Socialist Representative Alexandria Ocasio-Cortez endorsed Senator Bernie Sanders for President at a New York rally in front of over 25,000 attendees.

After her big endorsement, Cortez along with Bernie joined CBS reporter Nikole Killion to answer some questions regarding the game-changing move.

“As a woman of color, why back an old white guy? And is this the future of the party?” Killion asked Cortez.

While briefly looking down, Ocasio-Cortez replied: “I’m actually very excited about this partnership because it shows what we have to do in our country is that we have to come together across race, across gender, across generation.”

The subject then shifted to whether Ocasio-Cortez would be Bernie’s running mate, which Cortez said, “I think I’m too young for that.” However, Bernie didn’t rule out the prospects of Ocasio-Cortez working for his administration if he won the election.

Killion asked Cortez, “Would you work in a Sanders Administration, a Sanders White House?”

Bernie answered in place of AOC and said, “Yes you would!” as Ocasio-Cortez laughed hysterically. Video Below

Sen. @BernieSanders is getting a major boost to his presidential campaign after his heart attack nearly three weeks ago. Congresswoman @AOC endorsed him in front of more than 25,000 people at a weekend rally in New York City. @NikolenDC sat down with Sanders and Ocasio-Cortez. pic.twitter.com/Zh5JMdxTon