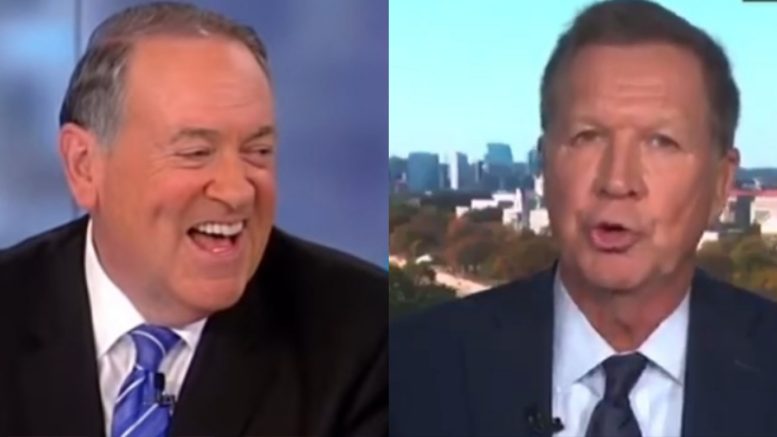 On Friday, Former Ohio Governor and Presidential candidate John Kasich openly called for President Trump to be impeached while appearing on CNN.

Kasich made his remarks in reaction to what Chief of Staff Mick Mulvaney said to the press in regards to military aid to Ukraine that he later clarified.

The media went into a frenzy after Mulvaney misspoke and appeared to suggest that military aid to Ukraine was connected to President Trump’s call to launch a probe into Democrats.

Mulvaney initially said to the press, “Did [Trump] also mention to me in the past that the corruption related to the DNC server? Absolutely, no question about that. But that was it. That’s why we held up the money.”

In a later clarification, Mulvaney said he meant to say the DNC server is NOT why they held up the money to Ukraine, and it had everything to do with “lack of support from other nations and concerns over corruption.”

Kasich, however, took Mulvaney’s initial statement at face value and tweeted a video of himself saying on CNN that if he were a member of Congress, he would vote in favor of President Trump being impeached. See Below

Kasich captioned the video, “After hearing Mulvaney’s comments, I now believe that @realDonaldTrump should be impeached by the US House and face a trial in the US Senate.”

“This is not a decision I’ve made lightly, but it’s clear now that a line was crossed,” he added. “This is an abuse of power. Action must be taken.”

Former Arkansas governor Mike Huckabee, who also was a Republican candidate in the 2016 election, responded to Kasich after seeing his tweet. See Below

“I remember when John was a pro-life Republican instead of an guy who vetoed pro-life bills in OH and now an opportunist who has long hated @realDonaldTrump & surely will be rewarded by the bottom feeding Catfish News Network,” he concluded.

Et tu, Brute? No surprise. Sad. I remember when John was a pro-life Republican instead of an guy who vetoed pro-life bills in OH and now an opportunist who has long hated @realDonaldTrump & surely will be rewarded by the bottom feeding Catfish News Network. https://t.co/r0lXDLhZzH

Related Article: Huckabee Creates A Fresh Nickname For CNN As Paragraph #22 Of Their Report Discredits The Whistleblower

Trey Gowdy On Why Nancy Pelosi Withholding Articles Of Impeachment: “This Is About The Senate”