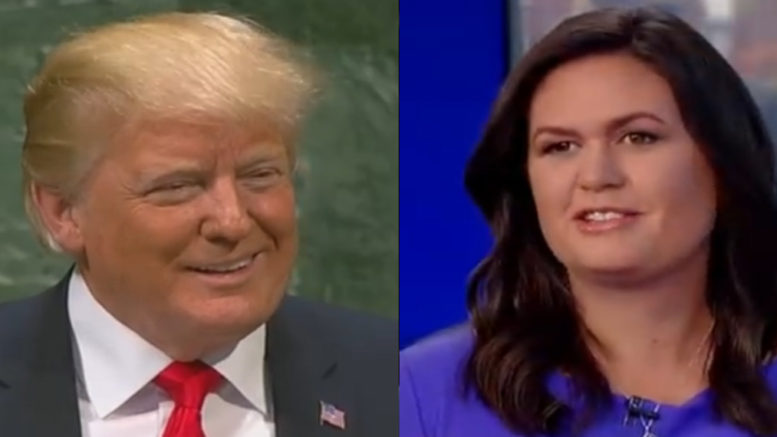 Sanders resigned from press secretary at the end of June and currently works at Fox News as a contributor. She served at the White House for nearly three years.

The White House announced Wednesday evening that Sanders would be returning to public service in some form, as the President nominated her to a three-year term on the J. William Fulbright Foreign Scholarship Board, as reported by Daily Caller.

Sarah Sanders thanked President Trump for the nomination on Twitter Wednesday and said: “Grateful to @realDonaldTrump to be named to the @fulbrightboard – established by the late U.S. Senator from my home state of Arkansas.”

The Fulbright Program, which is sponsored by the U.S. Department of State’s Bureau of Educational and Cultural Affairs, grants money to students, professionals, researchers, and others to pursue cultural interests abroad. It is world-renowned and considered to be one of the most prestigious grants available. All 12 board members are considered to be highly regarded educators and public figures and are appointed by the president of the United States, reported Washington Examiner.

Also currently serving on the Fulbright board is another former Trump administration official: Heather Nauert, who served as the State Department spokesperson, as per Daily Caller. (Continued Below)

Sanders has also said that she is writing a memoir about her life that is due to be released near the time of the 2020 election. “Sarah will address subjects including the media, family, faith, and performing an all-consuming and highly visible job while raising her young family,” a statement from her publisher said in September, via Washington Examiner.

Upon her departure from the Trump administration, President Trump described Sanders as “irreplaceable,” a “warrior” and “very special person with extraordinary talents, who has done an incredible job.”

The former press secretary has also been recognized in TIME Magazine’s “40 under 40” as one of the best political operatives of her generation. (Continued Below)

We leave you with a Trump rally from the beginning of the year, where the crowd cheered and went wild for Sarah:

(Related: Sarah Sanders Indicates Why Joe Biden Was The ‘Big Loser’ In Tuesday’s Debate: ‘All The Fire On Stage Was By Elizabeth Warren’)