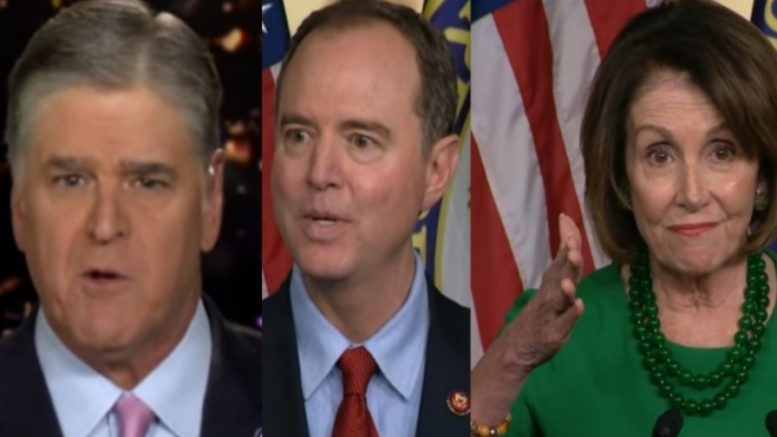 On Tuesday, Sean Hannity weighed in on House Speaker Nancy Pelosi’s decision not to hold an impeachment inquiry vote.

Hannity claims that the reason Pelosi made the decision is because she doesn’t have the votes needed to make radical Democrats’ “impeachment dreams” a reality.

The problem that Pelosi is having lies with Democrat lawmakers who represent battleground districts that President Trump won in the 2020 election, according to Hannity.

It could be politically damaging if these lawmakers decide to vote in favor of an effort that will remove a duly-elected President that majority of their constituents voted into office, Hannity suggested, and will put them at major risk of losing their seats to Republicans in the 2020 election.

Related Article: Brit Hume Responds As Pelosi Decides Not To Hold An Impeachment Inquiry Vote: ‘Why Would She Hold A Vote?’

Hannity revealed the list of the 31 Democrat lawmakers he was referring to, who he said will “make or break the radical socialist Democrat part’s impeachment dreams,” which can be seen in the video below.

President Trump unleashed a storm of tweets Wednesday morning in reaction to Democrats continued impeachment efforts in wake of Pelosi’s decision to keep the inquiry hidden from the public.

We leave you with Trump’s Wednesday morning tweets:

You would think there is NO WAY that any of the Democrat Candidates that we witnessed last night could possibly become President of the United States. Now you see why they have no choice but to push a totally illegal & absurd Impeachment of one of the most successful Presidents!

“What is happening to President Trump with Impeachment is a Constitutional Travesty.” @GrahamLedger The likes of which we have never seen before. It is Adam Schiff and Nancy Pelosi who should be impeached for fraud!

95% Approval Rating in the Republican Party. Thank you! Just won two Congressional Seats in North Carolina, & a Governors runoff in Louisiana, which Republicans should now win! Because of Impeachment Fraud, we will easily take back the House, add in the Senate, & again win Pres!

Our record Economy would CRASH, just like in 1929, if any of those clowns became President!

Republicans are totally deprived of their rights in this Impeachment Witch Hunt. No lawyers, no questions, no transparency! The good news is that the Radical Left Dems have No Case. It is all based on their Fraud and Fabrication!