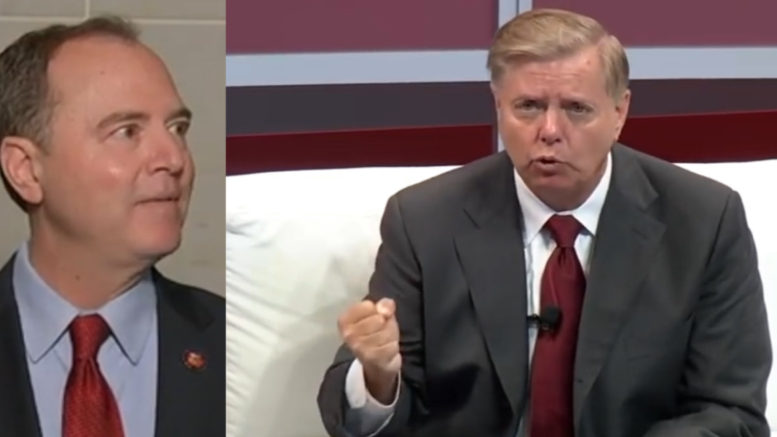 Senate Judiciary Chairman, Lindsey Graham (R-SC), took to Twitter on Friday where he responded to a report pertaining to the Ukraine “whistleblower”, who reportedly wants to testify to Congress in “writing”, instead of appearing in person.

The Wall Street Journal reported that lawyers for the anonymous CIA officer have asked lawmakers if the whistleblower could submit testimony in writing, but the House and Senate Intelligence Committees have not yet responded.

The request comes amid Democrats’ desire to protect the identity of the whistleblower, along with worries over safety and media scrutiny. President Trump and Republicans believe the president should have a right to confront his accuser and have also cited new reports indicating the whistleblower could have partisan motives. His attorneys have acknowledged he is a registered Democrat who has worked with at least one 2020 candidate. On Thursday, reports surfaced that the candidate was Joe Biden, as reported by Fox News.

(Related: Sen Graham Gives Dems An Ultimatum If Schiff Fails To Release Volker’s Testimony: ‘If This Continues, I Will Call Volker To Testify’)

Democrats launched an impeachment inquiry last month after the whistleblower filed a complaint about President Trump, despite the Commander in Chief releasing the transcript of the phone call between him and Ukrainian President Zelenksy.

Sen. Lindsey Graham pushed back at the idea of the whistleblower testifying in writing, calling the Democrats’ impeachment effort a “sham”. (Continued Below)

The Senate Judiciary Chairman proclaimed on Twitter Friday, “The Trump Administration and House Republicans should say HELL NO to this idea!”

“What was unseemly in the House of Representatives is becoming a charade,” he continued.

“Allowing the whistleblower to testify in writing would violate every principle of due process and show what a sham the House impeachment process has become,” Graham expressed. (Video Below)

What was unseemly in the House of Representatives is becoming a charade.

Allowing the whistleblower to testify in writing would violate every principle of due process and show what a sham the House impeachment process has become.